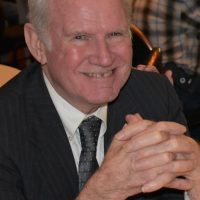 Albert was born on July 6, 1942 in Los Angeles, California to Lady Juanita (McCalman) Sallee and George Frank Sallee and passed away on March 30, 2018 in Sallisaw, Oklahoma. He was married to Jerry (Walton) Sallee on September 28, 1988 in Greenwood, Arkansas. Albert was a beacon in the community for many years. After starting his local business, Sallee Plumbing, he committed himself to putting into and giving back to his community. He was an integral part of the Sallisaw planning Commission and was awarded grand recognition of 39 years of service in 2017. He was the President of the Sallisaw Jaycees on multiple occasions and was elected Senate Director for the entire state of Oklahoma. He was named and awarded outstanding state director of Oklahoma and was selected to the International Senate Lifetime award. He participated fully and wholeheartedly to help his neighbors, friends, and family.

Wife: Jerry of the home

Numerous other relatives and friends

He was preceded in death by his parents, George and Lady Sallee

Viewing will be Monday 1 – 8 pm at Agent Mallory Martin Funeral Home in Sallisaw. The family will greet Monday 6 – 8 pm at the funeral home.