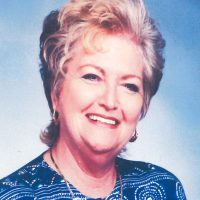 Memorial Service for Anna M. Crow-Jones, 82, of Muldrow, Oklahoma will be held at a later date under the direction of Agent Mallory Martin Funeral Service, Inc.

Memorial Service for Anna M. Crow-Jones, 82, of Muldrow, Oklahoma will be held at a later date under the direction of Agent Mallory Martin Funeral Service, Inc.

Ann was born on July 7, 1939 in Muldrow, Oklahoma to Paul Walker and Minnie Ellen (Gipson) Sharp. She took a plane to Heaven on June 8, 2022 to be with those who have gone on before her. She was preceded in death by her grandparents; parents; first husband, Richard A. Crow, Sr. (1979) and second husband, George M. Jones (2014); one sister, Bonnie Nadine McGehee, four brothers, one being Jimmy Paul Sharp; one niece, Melissa McGehee Schroeder; and two nephews, David Preston Osborn and Thomas H. “JR” Osborn, Jr.

Ann was retired from Headquarters U.S. Army Reserve Command, Fort McPherson, Georgia. While stationed there and other duty stations, she spend the most of her time in the air traveling to and from assignments during her career with the Army. She is a lifetime member of the National Association of Uniformed Services, Fleet Reserve Association, National Active and Retired Federal Employees where she served as Arkansas Federation Secretary for 10 years and treasurer for the local chapter for 12 years, Past Matron of the Order of the Eastern Star – of both chapters of Electa of Muldrow and Liberty 402 of Fort Smith, American Business of Women’s Association, and a volunteer with the Muldrow Cherokee Community Organization. Ann loved to knit and sew of which she taught in both areas all the way from Japan to Georgia.