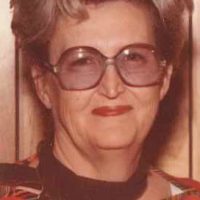 Graveside Services for Arbie Jewel Fink, 93 of Vian, Oklahoma will be at 1:00 p.m. on January 23, 2018 at Box Cemetery in Vian, Oklahoma under the direction of Agent Mallory Martin Funeral Service, Inc.

Arbie Jewel Turney Fink made it to her heavenly home for breakfast on the morning of January 18, 2018 after making a lifetime of memories. She peacefully and quietly left her daughters side at the Vian Nursing Home in Vian, Oklahoma, to join a host of family and friends who had been waiting for her, she no doubt went running and shouting to greet them, much like the story she would tell of the day her momma was baptized in the river and came out running and shouting.

Jewel moved with her family to the Blackgum Mountain area when she was a young girl. After attending school, she married her high school sweetheart Eugene Marlin Fink on March 3, 1941 at the courthouse in Sallisaw, Oklahoma. Together they had three children, Barbara Jean (1942) Jerry Darvin (1945) and Larry Don(1949).

Jewel faithfully followed her husband around from job to job, state to state. Wherever they ended up, lifelong friends were made. They made their home, in California, Texas, Arkansas, Missouri, Michigan and Florida over the years. But they always returned to their beloved Blackgum, Oklahoma.

Jewel was a founding member of Blackgum Baptist church in 1952. A legacy and foundation she helped build and was most proud. She often prayed that her family might come to find the faith that she served so deeply.

She is preceded in death by her husband of 59 years, her youngest son Larry, her parents, all of her siblings, Ruby Compton, Verbie DaVault, Ona Fountain, Bea Turney and Joe Turney as well as several nieces and nephews.

Graveside Services for Jewel will be Tuesday, January 23, 2018 at 1:00 pm at Box Cemetery with the Reverend Dale Ritter Officiating.

Jewel’s cherished moments were cooking for her family and friends. She made sure their stomachs were always full and there was always a place at the table. No doubt she will hold a spot at the table and have a big pot of dumplings or chocolate gravy waiting for the next arrival.