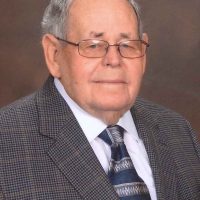 Services will be at 10:00am on November 18, 2017 at First Assembly of God Church in Sallisaw, OK. Burial will follow at Liberty Cemetery in Roland, OK under the direction of Agent Mallory Martin Funeral Service, Inc..

Honorary Pallbearers will be Frank Weatherford and James Williams .

Viewing will be Friday from 10 am – 8 pm at Agent Mallory Martin Chapel in Sallisaw, OK. The family will greet from 6-8 at the funeral home.

Arnold was an avid hunter, fisherman, golfer and OU fan. He was a former deacon and adult Sunday school teacher for over 50 years at First Assembly of God Church in Sallisaw. He was also a member of the Ouachita Wilderness Club and president of Speer Hardware Co. for 42 years.

wife: Virginia of the home

2 sons and dtrs in law: Steve and Debbie O’Neal of Sallisaw, OK
and Mark and Angela O’Neal of Alma, AR

He was preceded in death by his parents: Arthur and Delia O’Neal and 1 brother: Lloyd Leon O’Neal