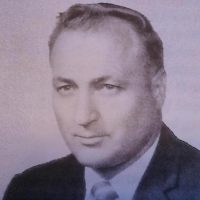 Graveside services for Bernell “Bernie” Jiles, 87, native of Sequoyah County, Oklahoma will be held at 11:00 AM on Saturday, January 16, 2021 at Sallisaw City Cemetery. At Berrnell’s request, in leu of flowers, he requsted a donation be made to his church: The River – PO BOX 1107 – Monument, CO 80132

Bernell “Bernie” Jiles, 87, went to be with his Lord on January, 2 2021. He passed quietly in his home, attended by family and friends. We lost a giant of a man that day.

Bernell was born on October 28, 1933 the son of Jack and Margaret (Walker) Jiles. He is survived by his son, Dr. Michael B. Jiles and his wife Holly of Larkspur, Colorado; his daughter, Tammy G. Jiles of Lawrence, Kansas; his beautiful grandchildren, Benjamin Jiles of Larkspur, Colorado and wife Sierra, (Cleburne) Texas, Elijah Jiles and fiancé Sydney Henthorn of Larkspur, Colorado and Jessie Wendler of Lawrence, Kansas, and step granddaughter, Rees Bristow of Portland Oregon; great granddaughter, Blakley Jiles, and two step great granddaughters, Lucia and Everly Bristow; Two brothers, Raymond Jiles of Broken Arrow, Oklahoma, Jack Jiles and wife Shirley of Sallisaw Oklahoma; his sister, Wanda Kay Smithson of Sallisaw Oklahoma, and many nieces and nephews that he loved dearly.

Bernell was a native of Sequoyah County, Oklahoma. He graduated from Central High School in Hanson, Oklahoma. He attended Connors State College from 1952 thru 1954 and graduated from Northeastern State University in 1956 with a Bachelor of Science in Education. Shortly after graduation, Bernell married the love of his life Loretta (Norvell) Jiles and was immediately drafted into the U.S. Army. He completed his term in the Army and continued to serve his country in the Army Reserves for a total of 18 years.

Bernell entered the business world with a position at Continental Supply. He then accepted a position at Leland Equipment Co. as manager of Parts and Service. In 1966 he joined Vickers Tulsa Division in Sales and Marketing. In 1972 Bernell accepted a position as Director of Marketing with Funk Mfg Division Gardner Denver Corp in Coffeyville, Kansas. In 1982 He became the President of Gear Products Inc. where he remained until his retirement in 1997.

Bernell and Loretta were very active with their church. Bernell was ordained Deacon of First Baptist Church in Tulsa, Ok. He served on The Board of Directors of the Tulsa Area Manufacturing Association, The American Red Cross and Connors Development Foundation. As well as many other organizations. He was proud to help design the First Southern Baptist Church in Coffeyville, Ks.

Bernell loved sports. He played Baseball in High School and went on to teach Baseball to young people and coached little league. He was passionate about his Church and lived his faith with honesty, integrity and giving. Bernell always answered the call of adventure. He traveled to many countries for his business, and many business associates still remember Bernie as a great personality. He was always kind and listened to what each person he encountered had to say. He will be remembered with fond esteem by those who worked with him as strategic, smart and compassionate, with a good sense of humor and for his love of family and his God that kept him going each day.

Bernell loved outdoor work and always had a beautiful garden which he shared with everyone. Bernell and Loretta always had beautiful flower gardens and loved to help their children with their garden projects.

During his retirement he studied and became an excellent wood carver, making beautiful carvings that he shared with his family and loved ones. He enjoyed coin collecting with his granddaughter and teaching his grandson the art of wood carving.

After the death of his wife, Loretta, Bernell moved to the home that they were building in Larkspur, Colorado. Loretta never got to see the home she designed with their son, Mike but Bernell made sure that every detail that she planned was fulfilled.

Bernell will be remembered for his hearty laugh and sense of humor, his warmth, generosity, creativity, and his tender heart. He loved people and helped so many.

Graveside services will be held at 11:00 AM on Saturday, January 16, 2021 at Sallisaw City Cemetery. At Berrnell’s request, in leu of flowers, he requsted a donation be made to “The River” his church in Monument, Co.
The River
PO BOX 1107
Monument, CO
80132