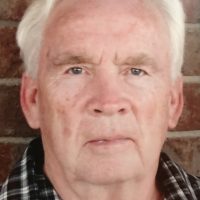 Graveside Service for Billy Carrol Henry, 84, of Sallisaw, Oklahoma will be at 1:00 PM on Monday, September 28, 2020 at Sallisaw City Cemetery in Sallisaw, Oklahoma under the direction of Agent Mallory Martin Funeral Service, Inc.

Graveside Service for Billy Carrol Henry, 84, of Sallisaw, Oklahoma will be at 1:00 PM on Monday, September 28, 2020 at Sallisaw City Cemetery in Sallisaw, Oklahoma under the direction of Agent Mallory Martin Funeral Service, Inc.

Billy Carrol Henry was the oldest of nine children, born on November 30, 1935 in Gans, Oklahoma to Pearl Juanita (Brunk) Henry and Earl (Pete) Henry. Although Billy was his given name, he was often called Rastus or Rasty by his family. He was reunited with his mom, whom he had a very special bond with, on September 24,2020 in Sallisaw, Oklahoma at the age of 84 years, 9 months, and 24 days.
He loved his family. He was always ready to lend a hand to his children making repairs and giving advice. He was an awesome papa. If you’ve ever heard the saying “If I’d have known how much fun grandchildren were I’d have had them first” that described him. When speaking of his three children He’d say they were more trouble when they were grown than when they were little, and then he’d grin that ornery grin of his. He loved his children and grandchildren.
He gave his heart to the Lord as a young man, served as a deacon at First Baptist Church in Sallisaw, attended Emmanuel Baptist Church in Sallisaw, and later became a member of the First Assembly of God Church also in Sallisaw.
Having been taught the importance of work at an early age, Bill worked hard all of his life. He was an upholsterer by trade but also worked as a size and weights trooper for the Oklahoma Tax Commission, was a used car salesman in Fort Smith, a custodian and bus driver for Sallisaw Schools and Indian Capital Vo-tech, a custodian for Emmanuel Baptist Church and First Assembly of God Church, a vending machine operator, and held various other jobs titles throughout his lifetime.

He is survived by his wife of almost 40 years Geneva (Caughman) Henry of the home and his three children; son Philip Henry and wife Laura and Daughter Sherrel Henry all of Sallisaw, Oklahoma and daughter Sheila Crittenden and husband Mack of Stilwell, Oklahoma. He is also survived by five granddaughters, Chanisty Keaton and Sidney Henry of Sallisaw, Shawnda Wear and husband Jonathan of Van Buren, Arkansas, Mackenna Vanderheiden and husband Nathan of Rogers, Arkansas, and Mackaylee Crittenden of Stilwell; five great-grandchildren Joshton Henry and Madicynn Keaton of Sallisaw, Brendon Copeland of Fort Smith, Arkansas, and Grant Wear and Emilee Wear of Van Buren, Arkansas. Three sisters Shelba Bethel and husband Lander of Norman, Oklahoma, Brenda Wilson of Norman Oklahoma, and Paula McQueen and husband Cody of Broken Arrow, Oklahoma. Two brothers Earl Henry Jr and wife Myrna of Gans, OK and Bobby Don Henry of Grady, AR , Sister-in-law Barbara Henry of Lone Grove, OK as well as many nieces, nephews, friends, and loved ones. He was preceded in death by his parents, two sisters Lucy Kendrick and Sharon Henry, and brother Ron Henry.

Honorary Pallbearers will be Jack Plunkett and the late Terry Ellis.

Viewing will be 10 AM – 4 PM Saturday and 2 PM – 8 PM Sunday at Agent Mallory Martin Funeral Home in Sallisaw, OK.