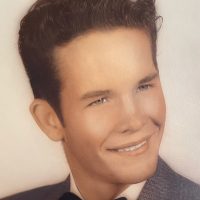 Billy G. “the G stands for Genius” Rhodes graced this world with his presence on December 6, 1938 in Sand Town Bottoms, near Vian, Sequoyah County, Oklahoma. The sole male child of Hodge Edgar and Artie Mae (Rogers) Rhodes, starting a legacy that spans over 8 decades and touching innumerable lives.

“The Genius” started his young life as a child of migrant workers who traveled between Oklahoma and Weedpatch, California, trying to scrape a living to survive. He started school at Sunset Schools in Weedpatch where the curriculum included class work, farming and aviation. He was awarded the Marble Shooting Champion of Kern County in 1950.

After moving back to Oklahoma “the Genius” was set to graduate from Muldrow Public Schools in 1956 but he left school to help provide for his family back to California. His eye was caught by a beautiful girl back home named Kay Blaylock and was enamored. It was the thought of her that caused him to leave California and return home to Muldrow and finish high school, being voted President of his Senior Class of 1959. Billy Gene was drafted into the Army in 1961 and was based in Fort Carson, Colorado which ignited his passion for Colorado that he passed down to his children.

He worked at various jobs and was hired at Norge (Whirlpool) Manufacturing. He married his high school sweetheart, Kay Blaylock, on June 26, 1964. He and Kay worked hard and saved to provide for their growing family, starting with son, Michael, then William, Raymond and finally, Tad.

“The Genius” commuted to Northeastern State University and received his Bachelor’s Degree in Education so that he could spend the summers with his family traveling around Colorado. Mr. Rhodes was an Industrial Arts Teacher, History Teacher and renowned Disciplinarian at Muldrow Public Schools. “The Genius” retired in 1995 and never looked back. His last 30 years has been spent enjoying his family, the land that he loved, his sons and their families, taking grandkids around the ranch on his golf cart, and most of all, the love of his life, “Hot Lips.”

He was a Hot Rodder, a gardener, an ultimate supervisor, and a renowned orator who could expound for endless hours on all the beautiful and amazing things he experienced in his life. He was a member of Trinity United Methodist Church in Muldrow, Oklahoma. If you knew him you were blessed.

his wife, Kay (Blaylock) Rhodes of the home;

numerous other relatives, friends and students.

He was preceded in death by his son, Michael Allen Rhodes; and his parents, Hodge and Artie (Rogers) Rhodes.

Viewing and Visitation will be 10 AM – 8 PM Wednesday at Trinity United Methodist Church in Muldrow, Oklahoma where the family will greet 6 – 8 PM.