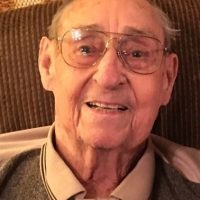 The funeral service will be at 1 pm, on Monday, January 6, 2020 at Agent Mallory Martin Funeral Home, Sallisaw, OK. He will be laid to rest at Sallisaw City Cemetery.

Billy “Joe” Nimmo passed away Monday, December 30, 2019. He was born in Sallisaw, OK on June 14, 1933 to Ernest and Dora Melissa Nimmo, the 5th of their ten children. Joe attended Sallisaw High School where he played basketball and was captain of the football team. Phyllis June Patrick and Joe were married May 3, 1952 in Van Buren, Arkansas and celebrated 66 years of marriage. Joe and Phyllis moved to California in 1953, where Joe worked in an airplane factory for several years. In 1963 Joe and Phyllis built and opened the Ponca City Nursing Home. Together they owned and operated the Ponca City Nursing Home and the Highland Nursing Home for 35 years.

Joe enjoyed working his land and raising cattle. Joe and Phyllis loved to travel in their motor home, especially to Gunnison, Colorado on their yearly fishing trip. Joe was a true OU football fan, and always enjoyed watching his children and grandchildren’s sporting events. His greatest love and joy was his family.

He was preceded in death by his wife Phyllis, his parents and seven siblings.

The service will be at 1 pm, on Monday, January 6, 2020 at Agent Mallory Martin Funeral Home, Sallisaw, OK. He will be laid to rest at Sallisaw City Cemetery. Arrangements under the direction of Trout Funeral Home. In lieu of flowers the family asks donations to Ponca City Humane Society, 900 W. Prospect, Ponca City, OK 74601 or Hospice of North Central Oklahoma, 445 Fairview Ave., Ponca City, OK 74601