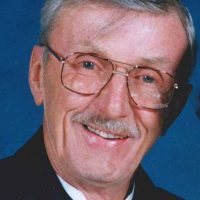 Memorial Services for Bob Browning, 83 of Sallisaw, Oklahoma will be at 2:00 pm on Sunday January 21, 2018 at Agent Mallory Martin Funeral Home Chapel in Sallisaw. Cremation is under the direction of Agent Mallory Martin Funeral Service, Inc.
He was born on December 31, 1934 in Cambria, Illinois to Freda (Vancil) Browning and Nova Rufus Browning and passed away on January 17, 2018 in Sallisaw, Oklahoma. Bob was married to Toinette (Powell) Browning on November 23, 1955 in Denver, Colorado. He was preceded in death by his parents, Nova and Freda (Vancil) Browning, and one brother, Richard Browning. Bob loved to bowl, hunt, fish, and do woodworking.