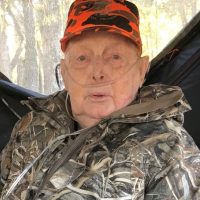 Viewing will be Thursday 10 am – 8 pm at Agent Mallory Martin Funeral Home in Sallisaw. The family will greet from 6 – 8 pm.

Bobby H. Adams, 87 of Vian, Oklahoma passed away on November 29, 2017 in Vian, Oklahoma. He was born on Janujary 21, 1930 in Vian, Oklahoma to Martha Bertha (Robinson) Adams and Otho William Adams. He was married to Alice Beatrice (Taylor) Adams on June 5, 1954 in San Lorenzo, California. Mr. Adams served in the Berlin Korean Conflict from 1948 – 1953 in the Air Force Crash Fire Department. He was a Greyhound bus mechanic and a farmer. He loved to fish and hunt.

He was preceded in death by his wife, Alice; parents, Otho and Martha Bertha Adams; 3 brothers, Gerald, Clarence and Eddie Adams; and 1 sister, Ica Stevens