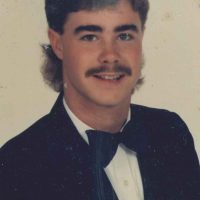 Viewing will be Tuesday 3 – 8 pm and Wednesday 10 am – 8 pm at Agent Mallory Martin Funeral Home in Muldrow. The family will greet Wednesday from 6 – 8 pm at the funeral home.

Services will be at 1 pm on November 30, 2017 at Trinity United Methodist Church in Muldrow, Oklahoma.

Brandon Joe “B.J.” Lewis, 47 of Muldrow, Oklahoma passed away on November 24, 2017 in Hackett, Arkansas. He was born on November 13, 1970 in Ft. Smith, Arkansas to Carolyn Gail (Sims) Lewis and Eddie Joe Lewis. He was a brick mason and of the Assembly of God faith.

He was an avid and loyal Razorback fan. He treated everyone like family and loved everyone no matter what.

Numerous aunts, uncles, and a host of cousins

He was preceded in death by his mother, Carolyn Lewis; grandparents, Star and Mary Sims and Ted and Ruby Lewis; and cousin, Jared Edwards