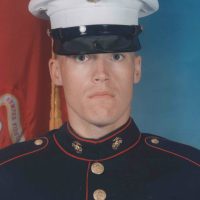 Today we celebrate the life of Bryan Lee Barrow who was taken from this life much too soon on January 11, 2018 at the age of 38 in Okmulgee, Oklahoma. Bryan was born in Ft. Smith, Arkansas on April 24th, 1979 to Anthony Jacob Barrow and Darlene Beirne Barrow. He graduated from Muldrow High School in 1997 and attended UAFS studying engineering.
In the year 1999, Bryan attended the graduation of his younger brother, Adam, from Marine Corps Boot Camp and decided that he wanted to be a Marine. Working diligently, he lost 180 Lbs. to accomplish his goal. He entered Marine Corps Boot Camp in September 2000, in MCRD, San Diego, California. Serving honorably for five years, Bryan was discharged in 2005 with an Honorable Discharge. Bryan was extremely proud to serve his country in The Corps.
Bryan was a beloved family member and was always letting his friends know how much he loved his family. He was devoted to his fiancée, Kira Lambillotte, to whom he proposed the night before his passing.
He is survived by his Parents, Anthony and Darlene Barrow of Muldrow, Oklahoma, his brother, Adam Barrow and wife, Jessica, of Tulsa, Oklahoma, his fiancée, Kira Lambillotte, of Okmulgee, Oklahoma, his Maternal Grandparents, Patrick and Carol Beirne, of Towanda, Pennsylvania, his Paternal Grandmother, Geneva Barrow of Muldrow, Oklahoma, 3 nieces, and numerous aunts, uncles, and cousins.
A memorial Service will be held to honor his life at the Agent Mallory Martin Chapel in Muldrow, Oklahoma, on Wednesday January 17th, 2018 at 10:00 A. M.. “SEMPER FI” Marine!