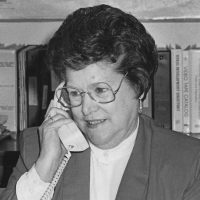 A memorial gathering for Carlotta (Taylor) Davis will be held at the Agent Mallory Martin Funeral Home in Sallisaw, on June 23, 2021 at 10:00 AM.

A Memorial Gathering for Carlotta (Taylor) Davis will be held at Agent Mallory Martin Funeral Home in Sallisaw, Oklahoma, on June 23 at 10:00 AM.
She was born near Sallisaw on November 23, 1927. She died on June 5, 2021 in Stillwater, Oklahoma. She was employed by the Oklahoma State University Extension Service, and worked in the courthouse office of the County Agent, for forty-three years. She served as secretary and was well known and liked by many local people as they did business with the agent , home economist, and 4-H director.
She attended McKey and graduated from Sallisaw High School. She attended the Draughon Business School in Ft. Smith. She married Gene Davis, of Vian, in 1954. They enjoyed their families and friends and especially their travels around the United States. She continued her interest in traveling after the death of her husband in 1959, and eventually visited all but two states in the US. She enjoyed touring with travel clubs, visiting Canada, Mexico, Hawaii, England, Scotland and most of the European countries.
She was preceded in death by her parents, Mark Taylor and Florence Dial Taylor; also, two brothers, Orman Taylor and John Bill Taylor.
Her survivors include: one brother, Glenn Taylor , and his wife, Billie.
Honorary pallbearers will be her four nieces: Monica Taylor Fite, Delores Taylor Smith, Pamela Taylor Pratt, and Paula Taylor Young; Also , her friends: Ora Lee Dobbs Kirk, Barbara Taylor Maddox, Barbara Dyke, Ruth Winters, and Janice Vaughn.
There will not be a graveside service.

A TRIBUTE TO CARLOTTA DAVIS
BY ORA LEE KIRK, A FRIEND
Seeing the “Face of a Friend” cannot help but brighten your day! You feel good just to be around such a face – the trusting smile, the understanding you see in their eyes and the warmth in their voice.
She was only 18 years old and had just completed a secretarial course at Draughon’s Business School in Fort Smith, when she arrived at the OSU Extension office in the Sequoyah County Courthouse. She was a professional asset for 43 years , assisting the county agent, home economist, and 4-H agent. She answered many questions and always with a warm and welcoming smile and professionally dressed.
In her OSU Extension role, she supported thousands of 4-H youth. She organized their project manuals and typed their programs and reports. She assisted Home Demonstration Agents as they completed numerous, beneficial community projects.
Although an employee, professionally, it was those personal attributes that made her face so friendly. It goes way back – her mom, Florence, and my mom, Bessie, were best friends when they reared their kids. Mark and Florence’s youngest son, Glenn, was only ten when his mom passed. Carlotta stepped up to the plate and nurtured and loved this younger brother. Now we see what a fine man he has become . He has reciprocated by taking care of Carlotta. He and his wife and daughter were the faces Carlotta saw that made her last days happiest.
Carlotta’s older brothers, Orman and John Bill, were her best friends. Carlotta was a professional, a Christian, and a loving family person. But my most vivid memory of her is that of a true friend. I consider Carlotta the “Face of a Friend”.