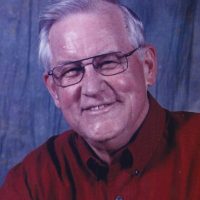 Funeral Service for Cleatis B.L. Jones, 86, of Vian, Oklahoma will be at 1:00 PM on Thursday, September 29, 2022 at Blackgum Harvestime Church in Vian, Oklahoma. Burial will follow at Stevenson Cemetery in Gore, Oklahoma under the direction of Agent Mallory Martin Funeral Service, Inc.

Funeral Service for Cleatis B.L. Jones, 86, of Vian, Oklahoma will be at 1:00 PM on Thursday, September 29, 2022 at Blackgum Harvestime Church in Vian, Oklahoma. Burial will follow at Stevenson Cemetery in Gore, Oklahoma under the direction of Agent Mallory Martin Funeral Service, Inc.

Cleatis B.L. Jones, 86 of Vian, Oklahoma was born in Webbers Falls, Oklahoma to William “Bill” Jones and Wilma Jones on September 22, 1936. He was married to Pauline Jones on December 19, 2005 in Vian, Oklahoma. Cleatis was a Pastor of Gum Springs Community Church for 48 years which he built from the ground up. As an ordained minister, he presided over many weddings. While being a pastor, Cleatis was a man of many talents. From steelwork to farming to being the best papa, he worked hard at every single thing he did. Cleatis was a faithful servant to the Lord and helped many people to find their way to Christ. His priorities were God, family, and cornbread with buttermilk. Everywhere he went, he had a hot pepper in his shirt pocket ready to put in any type of food from the best 5 star restaurants to the local restaurants in his community. Cleatis loved every single person he met and no one was ever a stranger. He loved to travel and sightsee. One of his favorite places was North Carolina. He also loved going to Branson, Missouri with his church family to get closer with the Lord and spend quality time with them. He loved watching his grand-kids play sports. He never missed a game no matter how far away it was. Cleatis found beauty in hard times, he could make people laugh during sad times, and most importantly he could pray for people during rough times.

While Cleatis is with the Lord, there are many left to carry on his astounding memory.

Survivors are his wife, Pauline of the home. His youngest daughter, Sheila Jones of Gore, OK. Her children are Danelle Walker and boyfriend Anthony Bonilla (Bo-Nee-Ah) of Tahlequah, OK and Jesse Fair and wife Malarie of Durant, OK. His oldest daughter Cleta Doyel of Gore, OK. Her children are Lori Hampton of San Jose, CA, Lesa Hampton, Johnna Acuff of Gore, OK, Julie Hampton, Annette Hampton, and Johnathan Hampton all of Porterville, CA. Cleatis’ siblings loved to call him TeTe. They are Jerry and Pat Jones of Sallisaw, OK, Raymond of Shawnee, OK, Ezra “Ed” Jones of Warner, OK, Billy Don Jones of Webbers Falls, OK, Donna Conrad of Webbers Falls, OK, and Ronna and husband Gary McConnell of Warner, OK. When Cleatis married Pauline, he gained step-children, Theresa Noisey of Warner, OK, Mike Mayes of Gore, OK and Tim Mayes of Gore, OK. Cleatis also had some god-family who could not go without mention, Elizabeth and Derrick Fieldgrove of Tahlequah, OK, George Hubbard and wife Shirley of Tahlequah, OK, Vernon and Sheila Stacy of Tahlequah, OK and Shannon and Carl Pack of Vian, OK. He had 23 great-grandchildren, 29 great-great grandchildren, and many nieces, nephews and cousins. Being a pastor, Cleatis Jones broadened his family margins by having a vast spiritual family that can be found from all over the world who loved him and cared for him as a spiritual father.

Cleatis Jones was preceded in death by his wife of 43 years, Lois Jones; parents, William “Bill” and Wilma Jones; his grandparents on both the Jones and Martin side; and two brothers, Jimmy Jones and Junior Jones.