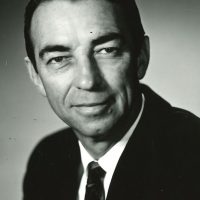 Originally from Sallisaw, Oklahoma, Dale was born January 3, 1921 to Robert Jackson “Jack” and Margaret Nell Wear. He attended the “Liberty Grade School” and the Sallisaw High School from which he graduated in 1939. Both school buildings have now been demolished. He was a member of the School Band and played an Alto Saxophone. He also played on the football team as Center on offense and Linebacker on defense. All 128 pounds at that time. After graduation, Dale worked at the Ivey’s Drug store, Bugher Service Station and Albert Peter’s Service Station. It was while working at the Peter’s Service Station on December 7, 1941, that the U.S. became involved in WWII.

Dale enlisted in the United States Navy in February, 1942, along with Wayne Hawkins, Dude Cassidy, Watie Moore, Paul Fine, and Roy Watkins. Dale studied diesel engines and was assigned to the propulsion section on the Destroyer Escort 16 “Edgar G. Chase.” After several months of serving on the DE 16, Dale requested a transfer to the Submarine Force. He transferred to the Submarine School located at New London, Connecticut. He was assigned to a submarine relief crew No. 222 of the submarine tender (AS-16) Howard W. Gilmore which was sent to the Majuro Atoll of the Marshall Islands. He later transferred to the Relief Crew No. 141 aboard the Submarine Tender (AS-15) Bushnell that was ordered to the Midway Island. While there, the war ended.

In 1944 Dale married his hometown sweetheart, Irene Jones, whom he met in Sallisaw at a political rally. Irene was working at the Mare Island Naval Base in Vallejo, California during the war cleaning the war ship guns.

After returning home from the war, Dale began working for the City of Sallisaw’s municipal light plant until it shut down as the city began receiving its power from the Grand River Dam Authority. It was during this time that he began working toward a college degree on the GI Bill. Beginning at “Conner’s State Agricultural College” at Warner, Oklahoma, he earned a degree in Mechanical Engineering (Power Option) from “Oklahoma Agricultural and Mechanical College” (now Oklahoma State University) in Stillwater, Oklahoma, graduating in 1955.

Dale became an employee of Public Service Company of Oklahoma in 1955 as an engineer and spent most of his employment in the power plants. Retiring in 1986 he spent his time helping to get the Muskogee War Memorial as it looks today so people could go aboard the submarine “USS Batfish” at the memorial. He served as the State Commander for the Oklahoma Submarine Veterans of World War II and Regional Director for the five state region of Arkansas, Kansas, Louisiana, Oklahoma and Texas.

A devout Christian, Dale was baptized in the First Christian Church of Sallisaw, Oklahoma. A devoted family man, he was always ready to toss a ball or help in any way he could. Predeceased by his parents and wife, Dale passed on May 25, 2021 and is survived by his daughter, Karen Srotyr, grandson, Robert Myskey and wife, Christie, and great-granddaughter, Hailee Ferguson, and many nieces and nephews. In lieu of flowers, please donate to Seasons Hospice or the Muskogee War Memorial.

Honorary Pallbearer will be Lloyd Jackson.