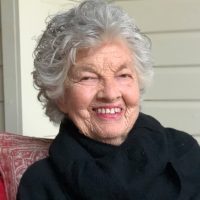 She was born on October 20, 1930 in Sadie Community, Oklahoma to Rebecca Jane (Powell) Davis and Charlie Robert Davis and passed away on September 21, 2019 in Plano, Texas. She married Carl Fay Blount on March 12, 1947 in Van Buren, Arkansas and he preceded her in death on August 20, 1975. She was then married to Benjamin Frank Harris on December 7, 1985 in Sallisaw, Oklahoma. He preceded her in death on March 20, 1989. She was a rancher and a member of the First Baptist Church in Sallisaw, Oklahoma.

numerous nieces, nephews and other relatives and friends.

Honorary Pallbearers will be Mike Hunn and Sam Jones III.

Viewing will be 10 AM – 8 PM Thursday at Agent Mallory Martin Funeral Home in Sallisaw, Oklahoma where the family will greet 6 – 8 PM.

Memorial contributions may be sent to the Children’s Ministry at First Baptist Church in Sallisaw, Oklahoma.