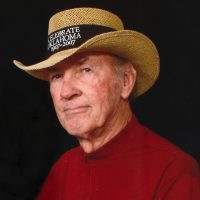 Cremation Service for Don Campo, 83, of Sallisaw, Oklahoma and formerly of Jones, Oklahoma is under the direction of Agent Mallory Martin Funeral Service, Inc.

Cremation Service for Don Campo, 83, of Sallisaw, Oklahoma and formerly of Jones, Oklahoma is under the direction of Agent Mallory Martin Funeral Service, Inc.

Don was born on December 13, 1939 in Madill in Marshall County, Oklahoma to Frankie (Jarman) Campo and Roy Franklin Campo and passed away on January 10, 2023 in Bentonville, Arkansas. He was married to Karen Jean (Elerick) Campo on July 22, 1957 in Gainesville, Texas. Don was a basketball, football and track coach. He was very proud of being able to coach his children, Marcia, Bob and Mike, during his career. He joined the service of the Lord in 1983 and has spread the gospel since then. Don was a member of First Christian Church of Sallisaw.

He was preceded in death by his parents; twin grandchildren, Christopher and Joshua Campo; and two sisters, Peggy Izard (Campo) and Colleen Vernon (Campo).