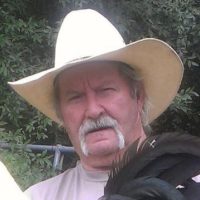 Donald L. “Chickenman” Gray was born on July 19, 1943 in Lahabra, California to Monnie (Oakley) Gray and Jack Ralph Gray and passed away on February 18, 2022 in Fort Smith, Arkansas. He was married to Shirl Gray on November of 1992 in Van Buren, Arkansas.

Donald was preceded in death by his parents, two sisters, Eva Joanne McBrayer and Wanda Jones as well as his brother, Jack Gray.

Don worked in the oil field as a foreman for 19 years before retiring. His passion was raising game chickens for over 50 years and being the best daddy and husband that he could be. He loved being around his family, goofing around, watching football, wrestling and westerns on TV, and speaking his opinion. There was never a time he didn’t tell the people he loved, that he loved them with a big hug before leaving. Now that he has left to be with Jesus, his family sends a big hug and “I love you” to him until reunited again. Don will always hold a special place in many hearts and will never be forgotten.