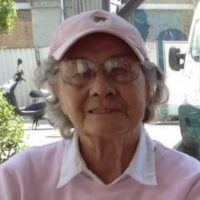 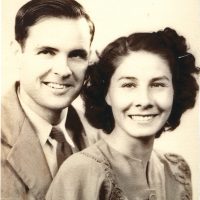 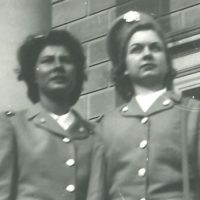 Lorene “Dolly” (Sanders) Farris, RN, MSN, MSEd, EdD, was born on September 12, 1924 in Dwight Mission community, Oklahoma, to Edward Walter Sanders and Nellie Mae (Sixkiller) Sanders and passed away on June 7, 2021, at the age of 96 years. She graduated in 1942, from Sequoyah Indian School and at 17 left on a bus to Washington, D.C., to attend Lucy Webb Hayes School of Nursing at Sibley Memorial Hospital. In May 1944, she was inducted into the U.S. Cadet Nurses Corps at Constitution Hall by Eleanor Roosevelt. After she finished her training, she returned to Oklahoma and attended Northeastern University in Tahlequah, Oklahoma. On March 7, 1947, she married Charles Edward Farris, MSW. Dolly went on to earn a Bachelor of Science degree in Nursing and a Master’s degree in Nursing from Washington University, St. Louis, MO. In 1970, she earned another Master’s degree in Education from Barry College in Miami Shores, FL and in 1983 a Doctoral degree in Education from the University of Miami, Miami, FL. Dolly was employed as a nurse in various capacities for 45 years. She was a member of the American Nurses Association, a board member and one of five founding members of the American Indian Alaska Nurses Association and a member of the Nursing Honor Society. Sigma Theta Tau. She was an enrolled member of the Cherokee Nation of Oklahoma. She retired as a tenured Professor of Nursing at Florida International University, in Miami, FL. She and her husband wrote and published professional articles and books on the American Indian. She was a member of the First Presbyterian Church of Sallisaw, OK and the Sequoyah County Historical Society. She and Charles enjoyed bicycling and traveling in the United States and abroad. Her husband Charles preceded her in death on February 10, 2012. She is survived by her sister Mary Sue Moseley of Atlanta, GA, and her brother Harvey Sanders of Albuquerque, NM; nieces, Pamela Sue Moseley of Atlanta, GA, Melissa Moseley of Atlanta, GA, Diane L. (Sanders) Seuffert of Morristown, NJ, Sue Laramie of Ft. Myers, FL, Debbie Latham of TN, and Ann Racehorse of Albuquerque, NM; nephews, David L. Sanders of Santa Fe, NM, Garland Farris, Jr. of Sallisaw, OK and John Farris of Springfield, VA. Plus, numerous great nieces and nephews. She was also preceded in death by her parents; sister Alice Sanders; and brothers Sam Ed, Gafford and Richard Riley Sanders.

Viewing will be 10 am – 8 pm Saturday and 2 – 8 pm Sunday at Agent Mallory Martin Funeral Home in Sallisaw where the family will greet4 – 6 pm Sunday.