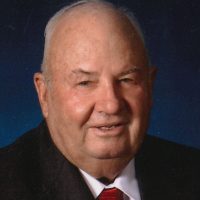 Memorial Service for Dane Vinson, 91, of Sallisaw, Oklahoma will be at 1:00 PM on Saturday, March 12, 2022 at Church of Christ in Sallisaw, Oklahoma under the direction of Agent Mallory Martin Funeral Service, Inc. Dane will be laid to rest at a later date in Hayes Center, Nebraska.

Memorial Service for Dane Vinson, 91, of Sallisaw, Oklahoma will be at 1:00 PM on Saturday, March 12, 2022 at Church of Christ in Sallisaw, Oklahoma under the direction of Agent Mallory Martin Funeral Service, Inc. Dane will be laid to rest at a later date in Hayes Center, Nebraska.

Eargle Dane Vinson was born March 18, 1930 in rural Nugent, Texas to Eargle H. and Mattie (Maserang)Vinson. He spent his early years in the Nugent/Abilene area, then in Wheeler County until they moved to a farm in the M.K. community in Hemphill County. He attended grade school at M.K., then junior high and high school in Canadian, Texas. Dane graduated from Canadian High School in 1950. He attended the Church of Christ at Washita where he was baptized, and was a member of the church in Canadian. Dane joined the United States Air Force in the fall of 1950 during the Korean Conflict. He was sent to West Texas College to study record keeping and payroll.

On September 26, 1950, he married his long time best friend and high school sweetheart, Imogene Rutherford. They were married and remained best friends for 71 years. Their daughter, Beverly and son Larry were born during the Air Force days, while they were based at Lake Charles, Louisiana, Topeka, Kansas, and Salina, Kansas. Their son Gary and daughter Lynda were born when they moved back to Texas. In 1960, he took an offer and had an adventure selling Case farm equipment in Hayes Center, Nebraska. He was a Hayes County Clerk for 8 years, and a traveling salesman for Augustine Company Office Equipment. He farmed and ranched in Hayes and Lincoln counties, leaving in the 1980s for Sallisaw, Oklahoma. He worked at Blue Ribbon Downs, Bill Weger Stables hauling brood mares, and drove a school bus for Central Public Schools, retiring in 1996. He was a member of The Odd Fellows Lodge, Hayes Center American Legion for 61 years, and Hayes Center Fire Department. He loved his Sallisaw Church of Christ, and loved taking his camper and had visited up to 70 different campsites. His pastime was piddling, watching and feeding the birds and squirrels, and visiting with kids and grandkids. He loved his boys but doted on all of his girls, they could just give him a hug and he was caught.

He is survived by his wife, Imogene Vinson; his daughter, Beverly and Jerry Unger of Hayes Center, NE, son, Larry and Joyce Vinson of Sallisaw, OK, son, Gary and Robyn Vinson of Glenwood, IA, and his daughter, Lynda and Rick Russell of Muldrow, OK; grandchildren, Jennifer and Curtis Smith of McCook, NE, Robert and Nickie Vinson of Nicut, OK, Amanda and Danny Wittman of Muldrow, OK, Jeffrey and Kelly Unger of Hayes Center, NE, Jarod and Amanda Vinson of Sallisaw, OK, J.L. and Sherri Vinson of Springdale, AR; J.L. whom they raised as another son since he was 11 months old, made a big difference in empty nesters’ lives. Eric and Wendy Vinson of Sallisaw, OK, Wyatt Vinson of Morrill, NE, and Catie Jo and Joe Lufkin of Sallisaw, OK and bonus grandchild, Lisa Hoffsommer; great-grandchildren, Garret Smith, MacKenzie Smith, and Elijah Smith, Kallen Unger, and Hailey Unger, McKinley (Mac) and Jessica Wittman, Aspen and Joe Farmer, and Savannah Wittman, Zack and Jonna Wittman, Jacob Wittman, Kirsten and Dylan Moreland, and Amanda D. Wittman, Lexie and Dylan Haning, and Zayn Vinson, Breanna and Jacob Vinson, Mariah Vinson, Dallas and Brandy Jones, and Austin Jones, Bricie Vinson, Maddie Vinson, Colton Vinson, Cody Cooper, and K.K. Cooper, Cree Vinson, and Braiden Vinson, and Travis Sage Lufkin; 18 great-great-grandchildren and this includes his two special great-great-grands, Brody and Lilly Wittman whom he thought hung the moon. He is survived by siblings and in-laws, George and Betty Vinson of Amarillo, TX, Gene and Patty Vinson of Imperial, NE, Lacreta Rutherford and J.R. of Canadian, TX and Jill Vinson of Lubbock, TX; and several nieces and nephews.

The family would like to give a special thanks to daughter-in-law, Joyce Vinson for her dedication in helping Imogene care for Dane during his extended illness. They would also like to thank the Heart of Hospice team for their wonderful care this past year.

Memorials may be sent in Dane Vinson’s name to Hayes County Ambulance Fund.