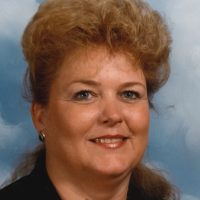 She was born on August 12, 1946 in Grandfield, Oklahoma, the youngest of 5 children born to Elsie Mae (Bilderback) Grant and Claud Earl Grant. In 1955, At the age of 9, while attending school at Stigler, OK, she was stricken with Polio. After high school, Ellen received her Associates Degree from Connors State College where she was a member of Phi Theta Kappa. She went on to receive her Bachelors Degree in Education and Masters of Education at Northeastern Oklahoma State University where she was a member of Alpha Chi. She was married to Jimmy McClendon on October 22, 1970 in Sallisaw, Oklahoma. Ellen was employed at Sallisaw Public Schools until retiring in 1992 due to Post Polio Syndrome. She was a lifetime member of Oklahoma Education and National Education Association and member of Marble City Historical Society and Marble City Community Organization. She utilized a motorized wheelchair and volunteered as manager and cooked for the senior nutrition center in Marble City for 4 years.

(Quoted by a friend of Ellen’s): Ellen was an example of graciousness, the epitome of true community leadership; she invested in the future of our town and community as a service leader of the historical society, community organization and city festivals. When she gave of herself, she gave her all for the betterment of her family, friends and neighbors.

Ellen enjoyed working beside Jimmy on the farm, fishing, feeding and watching the birds. She had her own special way of working the garden and attending to her flowers. The grandchildren will surely miss those prompt to talks that seem to last for hours (when just a minute really meant hours) She loved to share feeding her chickens, gathering eggs, playing a fame of cards or dominos, and giving rides on her wheelchair with the great grandchildren. Ellen passed away on September 18, 2021 in Marble City, Oklahoma.

“Some leave footprints, kindness, love, courage, compassion, inspiration, joy, faith, and humor. Meme left tracks of all of these in the souls whom knew her.”

Meme – you will surely be missed. We love you.

husband: Jimmy of the home;

and numerous nieces, nephews, other relatives and a host of friends.

She was preceded in death by her parents; and one sister, Elois Higgins.