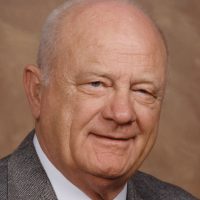 Everett Lynn Bolton was born on December 2, 1934 in Santa Ana, California to Thelma (Makeing) Bolton and Jessie Everett Bolton and entered eternal life on April 11, 2021 in Sallisaw, Oklahoma surrounded by his loving family. He married Joyce (Warren) Bolton on April 2, 1988 in Sallisaw, Oklahoma. He was raised in California. He was a Veteran of the U.S. Coast Guard. After his military service he joined the Gardena California Police Department where he became one of the first Polygraph Examiners in the state. During this time, he also taught Police Science at the local community college and was actively involved in the Gardena Kiwanis Club, serving as President for one year. He retired from the police department as a Detective Sergeant.

After retirement, he relocated to Sallisaw, Oklahoma and Lake Havasu City, Arizona where he pursued his hobbies of restoring cars and flying his Piper Cherokee between homes. He joined the Elks Lodge where he enjoyed playing cards and became a lifetime member.

He was preceded in death by one son, Mark Ivan Purcell; parents; and one brother, Dennis Purcell.