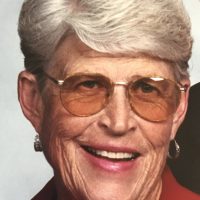 Florence was born April 25, 1931 in Omaha, Nebraska to Harold Hartzell Nicholson and Mary Velma (MCConnell) Nicholson. She departed this life on March 23, 2018.
She was raised in Ft Peck, Montana. She attended Nashua High School, being involved with the Band and being a majorette. She pursued a nursing program with Bozeman Montana college. She married her high school sweetheart, Robert E Harsch on Jan 19, 1951.
She made many travels with her husband through his work and service in the Navel reserve. Many moves from Montana, Washington, Nevada, California, Utah, and including Samoa brought them to settle in Sallisaw Ok in 1968.
Florence was a great cook and seamstress. She made many clothes and actually making full square dance attire for involvement with square dancing. She remained very active with her family as a Girl Scout leader and a excellent cook. Florence worked many years for WalMart and National Bank of Sallisaw and retiring from First National Bank in 1995. Bob and Florence built their dream home and became the “Rocking H”. Together they raised cattle and enjoyed the outdoors and the lake. They became avid RV’ers and traveled many places with close friends and family. Yuma, Arizona became a second home with many fishing stories and adventures to be told.