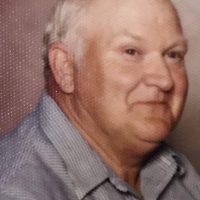 Memorial service for Franklin E. Robertson, 84 of Sallisaw, Oklahoma will be at a later date. Cremation is under the direction of Agent Mallory Martin Funeral Service, Inc.

Memorial Service for Franklin E. Robertson, 84 of Sallisaw, Oklahoma will be Thursday, November 7, 2019 at 2:00 PM at Garrett Funeral Home in Broken Arrow, Oklahoma. Cremation is under the direction of Agent Mallory Martin Funeral Service, Inc.

He was born on February 14, 1935 in Broken Arrow, Oklahoma to Alma Eula (Brooks) Robertson and William Ernest Robertson and passed away on November 2, 2019 in Sallisaw, Oklahoma. He was married to Sandra Lou (Williams) Robertson on September 17, 1981 in Poteau, Oklahoma. Mr. Robertson was a master builder and concrete finisher

numerous other relatives and friends.

He was preceded in death by his parents and 5 brothers: William Ernest, Jr., James Thomas, Charles Wayne, Carl Dean and Reuben Earl Robertson.