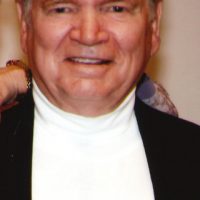 Cremation for Gene Gibson, 87, of Sallisaw, OK is under the direction of Agent Mallory Martin Funeral Service, Inc.

wife: Edna of the home;

He was preceded in death by his parents, 1 son: Randy Gibson, 2 step sons: Donald and Rick Holman, and 1 granddaughter: Shaina Burklow.

Cremation is under the direction of Agent Mallory Martin Funeral Service, Inc.