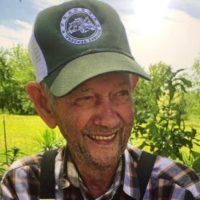 George was born on July 9, 1925 in Muldrow, Oklahoma to Maggie (Faulkner) Lee and Fred E. Lee and passed away on March 29, 2022 in Muldrow, Oklahoma. He was married to Grace (Jackson) Lee on October 25, 2010 in Muldrow, Oklahoma. George was a farmer and a rancher. He enjoyed the outdoors. He was either on his tractor cutting or baling hay, on his four wheeler in the pasture, working or feeding cattle, or plowing up a garden, working his tiller in the garden and harvesting the fruit of his labor. He and his brother, Fred Jr. loved to compete against one another each year on who would get the first ripe tomato or who had the best garden.

He always wanted a new John Deere tractor with an air conditioned cab. He achieved that goal when he was 90.

George went coon hunting, competing in coon hunts, and winning several times. He was proud to show off his coon dogs and his cow dogs that he trained.

He enjoyed going to the sale barn in Fort Smith, and visiting his friends.

He along with his brothers, Raymond Lee and Jr. Lee, built the house where he raised all five of his children and lived there for 59 years.

and numerous nieces, nephews, other relatives and friends.

Viewing will be 10 AM – 8 PM Thursday at Agent Mallory Martin Chapel in Muldrow, OK where the family will greet 6 – 8 PM.