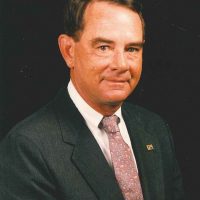 Viewing will be Tuesday from 10 am – 8 pm at Agent Mallory Martin Funeral Home in Sallisaw. The family will greet from 6 – 8 pm.

George was born June 24, 1941 in Vinita, OK to Vernon L. and Lela (Page) Glenn. He passed from this life on September 1, 2018 with his beloved family by his side.
He graduated from Vinita High School in 1959 where he excelled in football, basketball, track, and baseball. George also participated in the All-State Chorus and was a member of the Oklahoma All State Quartet. He attended Connors State College on a football and baseball scholarship.

George married the love of his life, Deanna (West), on June 1, 1962. He joined the Army National Guard in 1963. In 1965, they welcomed the light of their lives, their daughter, Tracy. George, Deanna, and Tracy moved to Sallisaw, OK in 1965 where he would establish his family and spend the rest of his life. He led a life of honor as a cherished family member and a pillar of his community.

He served as the youngest manager of Southwestern Bell for several years before he began employment as the Manager of the Sallisaw Chamber of Commerce. This was only the beginning of his service to his beloved community. Following his years at the Chamber, George became an MFA Insurance Agent which later became Shelter Insurance. George, or “Mr. Glenn,” served his customers faithfully for 46 years. Known for his personal service, George knew his customers by name and treated everyone with respect.

During his tenure as an insurance agent, he also sought to serve the community. In April 1977, he was elected mayor and served the city of Sallisaw for the next 25 years. In this role, his goal was to always provide the best possible services at the lowest cost for the citizens of Sallisaw.

Outside of his own community, he also served as the Chairman of the Grand River Dam Authority (GRDA).
He enjoyed golfing, fishing, and hunting with his friends. He was a talented singer, sometimes even mistaken for Johnny Cash. He shared his love for music with his granddaughters and enjoyed karaoke with them. George faithfully went to coffee, first at Lessley’s Café and later at Ed’s and Charlie’s Chicken, with some of his closest friends. He loved watching his daughter’s, granddaughters’, and great-grandsons’ events: basketball, softball, clogging, baseball, and football. He was always one of the biggest fans with the best advice in the stands. “Papa” or “Pop” was the wisest and funniest man in every room he walked into.
George’s legacy will live on for decades to come in his community but, first and foremost in his family.

Viewing will be held Tuesday, September 4, from 10:00am-8:00pm at Agent Mallory Martin Funeral Home in Sallisaw. The family will also receive friends from 6:00pm-8:00pm at the funeral home.

The family suggests memorial contributions may be made to the Sallisaw Chamber of Commerce, 301 E. Cherokee Ave., Sallisaw, OK 74955.