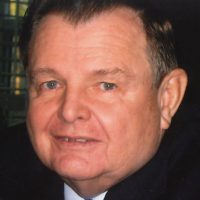 Harold grew up in the Big Horn Basin in Wyoming, mostly in the town of Worland. He lived on a 13 acre farm North of Worland where his family raised animals; cows, horses, pigs, sheep, chickens and rabbits. Harold milked the cows and helped feed and care for the animals. He especially enjoyed riding the horses and had many adventures. In winter, he enjoyed ice skating on the ice ponds.

He was an avid and active member of the Church of Jesus Christ of Latter-day Saints and a member of the Boy Scouts of America. He along with his good friend, David Brinkerhoff, were the youngest to achieve the Eagle rank at the age of thirteen.

After graduating from Worland High School in 1961, Harold attended Brigham Young University and received an Associate’s Degree in Electronics in 1964 and a Bachelor’s of Science Degree in Technical Teacher Education with a minor in Physics in 1966.

After graduating from BYU, Harold moved to Southern California and resided in Pasadena. He worked at Bell & Howell Research Labs (1966 – 1969) making semiconductor crystals of III-V chemicals such as Gallium Arsenide (GaAs), Indium Arsenide (InAs) and other materials.

In 1969, he moved to Dallas, Texas (1969 – 1972) and worked at Texas Instruments making materials for the red LED’s (light emitting diodes) used for watches and hand held calculators that became popular at that time.

In 1972, he returned to California, working with his mentor, Worth P. Allred, at Crystal Specialties (1972 – 1983). There they grew GaAs materials, supplying Universities and Aerospace companies for state of the art electronic products as well as national defense devices.

Harold’s greatest joys were his children and his devotion to God and His Church. He had a firm belief that his family would be together after death.

Harold was an Elder in His Church and later became a High Priest, serving in many positions. He was a youth teacher, scout master, seminary teacher, Elder’s Quorum President, Financial Clerk, Ward Organist, and Counselor in the Sallisaw Branch Presidency and later Sallisaw Ward Bishopric. He loved his Heavenly Father and felt a great closeness with his Savior and Redeemer, Jesus Christ.

After retiring, Harold returned to Worland, Wyoming to spend the last years of his parent’s life. While there he spent time fishing with his dad and learning to cook and make cookies and cinnamon twists with his mother. His father passed away in 2004 and his mother in 2008.

While in Worland, Harold “Hal” met Martha Mabray Tippetts from Muldrow, Oklahoma.  They married on December 28, 2007 in Broomfield, Colorado and were sealed in together in the Raleigh, North Carolina Temple on November 7, 2008. They lived very happily together in Muldrow, Oklahoma and boasted that as of the date of this writing, November 14, 2016, had never had a disagreement or argument.

Harold felt very blessed to have met Martha and moved to Oklahoma when he learned that he had bone marrow cancer (Multiple Myeloma) in 2008. He felt and remarked that if he stayed in Wyoming they would not have diagnosed the cancer before it had progressed and the premier treatment center was nearby in Little Rock, Arkansas (UAMS – University of Arkansas Medical Center). The center was established because Sam Walton of Walmart had MM and was financed through the Rockefeller Foundation.

Harold’s health went through ups and downs, mostly due to the side-effects of the chemo drugs. At one point, he lost his hair, which later grew back, had bouts of passing out due to extreme drops in blood pressure, as well as developing stomach and intestinal problems, along with neuropathy of the extremities.

In spite of these trials, he continued serving others through Church service as well as traveling with Martha to visit family and tour the country on road trips. They enjoyed a cruise on the St. Lawrence Seaway and visited Prince Edward Island. They visited Branson, Missouri often to see shows and shopping. They tried to visit family for special events such as wedding, baptisms, etc. as health permitted. Harold loved and enjoyed his later years in life and was proud of his contributions to the scientific progress and especially to helping and serving others through his Church. He felt truly blessed.

wife: Martha of the home;

numerous nieces, nephews and a host of relatives and friends;

and his 4-legged companion: Jacky.

He was preceded in death by his son, Christopher Quint Olsen; and his parents.

Viewing and Visitation will be 3 – 8 PM Friday at Agent Mallory Martin Chapel in Muldrow, OK where the family will greet 6 – 8 PM.

In lieu of flowers, memorials may be made to the Humanitarian Services, C/O LDS Philanthropies, 1450 N. University Ave. Provo, UT 84604.