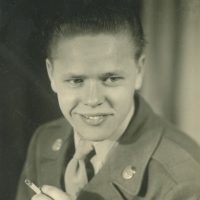 Harry “Pete” Miller, 96, was born on September 17, 1926 in Hockerville, Oklahoma to Nettie Florence (Johnson) Miller and Edward Jesse Miller and passed away on January 23, 2023 in Muldrow, Oklahoma. He was married to Sue (Gawf) Miller on July 30, 1949 in Van Buren, Arkansas. She preceded him in death on January 28, 2016. He was a steel draftsman, a veteran of the United States Army and of the Christian faith.