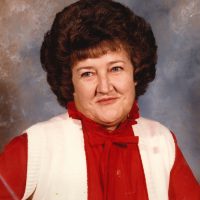 Graveside Service for Illa Lovene Barnes, 90, of Sallisaw, Oklahoma will be at 1:00 PM on Friday, February 14, 2020 at Sallisaw City Cemetery in Sallisaw, Oklahoma under the direction of Agent Mallory Martin Funeral Service, Inc.

Graveside Service for Illa Lovene Barnes, 90, of Sallisaw, Oklahoma will be at 1:00 PM on Friday, February 14, 2020 at Sallisaw City Cemetery in Sallisaw, Oklahoma under the direction of Agent Mallory Martin Funeral Service, Inc.

Illa Lovene Barnes was born on December 23, 1929, south of Sallisaw on Drake Prairie. She reached the age of 90 years before her death on February 11, 2020. She was born to Walter Calvin Bruton and Grace Lorene (Adams) Bruton. She was always proud of the fact that she had Cherokee ancestry and that her Great-Grandmother, Charolette Daugherty walked to Oklahoma on the Trail of Tears. She grew up on her family farm and was the fourth child of seven children. Her childhood was spent riding horses on the prairie, spending time with her family, and playing instruments and making music with her brothers and sisters. She attended the Harrison Schools for her education.

She met her future husband, Marion Lee Barnes, at a barn dance out on the prairie. Illa later rode a bus to Guymon, Oklahoma where Marion was working after his military service. They were married on July 16, 1954. They were married for 49 years until Marion’s death in 2004. They lived in Guymon and Tulsa for several years before returning to Sallisaw. She enjoyed spending time with her grandchildren, sewing, gardening, talking with her friends and shopping.

She was a loving wife, mother, sister, grandmother and great-grandmother. She was of the Pentecostal faith.

She was preceded in death by her husband, Marion Lee Barnes; three brothers, Jess, Joe and Wadie Bruton; and one sister, Lucille Clover.

Viewing will be 10 AM – 8 PM Thursday at Agent Mallory Martin Funeral Home in Sallisaw, Oklahoma where family will greet 6 – 8 PM.