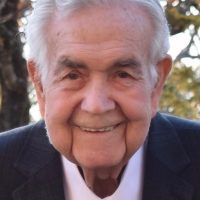 Funeral services for J.W. “Jim” Jones, 87, longtime resident of Muldrow, OK will be held at 11:00 AM on Tuesday, October 13th at Muldrow First Church of The Nazarene with Reverend Carl Fugett eulogizing and Reverend Dwight Campbell, officiating. Committal service will follow at U.S. National Cemetery in Fort Smith under the direction of Agent Mallory Martin Funeral Home in Muldrow, OK.

J.W. “Jim” Jones, 87, long time resident of Muldrow passed away peacefully in his sleep on October 6 in Fort Smith, Arkansas.

J.W. was born in East Prairie, Missouri to David and Allie Jones on December 11, 1932. He went to school at East Prairie. His mother taught him to play the guitar when he was young. As luck would have it, he could also carry a tune and the ladies loved his baritone voice. He met his beautiful wife Rosie Barborek while he and his cousin Vaughn Simmons, were the talent on a morning live radio show in Charleston, Missouri. Rosie would be waiting for her bus every morning when his show was over and the two hit it off. Unfortunately, J.W. was drafted into the Army and entered the Korean War. While serving our country he brought his musical talents to the troops and officers entertaining whenever and wherever asked with his other talented Army buddies. Upon release from the Army he and Rosie got married in Mississippi on November 5, 1955.

While in the Army he learned a little machining in between all the music playing and decided to go to Vo-Tech school for tool and die. He and Rosie moved to Michigan and that’s where they started their family beginning with Stephen Lyle. When Steve was five years old, J.W. and Rosie decided to get out of the cold and get back to Arkansas. He took a job at Norge (later Whirlpool) and ended up in the little town of Muldrow, Oklahoma. He later started his own screw machine business which did well. Then they expanded the family to include Connie Lynne, Charlotte, and Gregory Don.

One night a wonderful man Carl Hixon came calling from the Nazarene Church and J. W Jones gave his life to Christ. He then started playing music for the Lord spreading praise with many groups, as well as, always being up front in his home church playing that guitar and singing. Until, a cruel disease took that beautiful gift from him.

2 daughters and 1 son-in-law: Connie and Ron Riddle of Muldrow, OK and Charlotte Jones of Roland, OK;

2 sons and daughters-in-law: Stephen and Sherry Jones of Ft. Smith, AR and Gregory and Jamie Jones of Roland, OK;

He was preceded in death by his parents and wife.

Honorary Pallbearers will be Ayden Clark and Remington Clark.