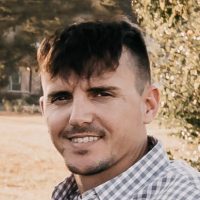 Jacob Alan Blount was born on November 10, 1987 in Fort Smith, Arkansas and departed this earth on November 23, 2021 in Sallisaw, Oklahoma. Jacob was a loving father to his son, Caden Blount and daughter, Emillie Kay Blount. He was the youngest son to his mother, René Blount and little brother to Marty Blount, Derrick Blount and sister-in-law Haleigh and a blessing to his nieces, Molli, Alex, Stevie and Jillian Blount, all of Sallisaw. Jacob was a member of Blunt Baptist church, worked in the maintenance department of Aviagen Hatchery and a videographer with the Mix Channel 19 film crew. Jacob was a graduate of Sallisaw High School, Class of 2007, and the Tulsa Welding School, Spring Class of 2019. Jacob was happiest when spending time with his children whether it be playing dominos, watching Caden on the football field or listening to Emillie’s beautiful singing voice. Jacob loved to be outdoors, on the land of his grandparents and around the creeks and watering holes of Marble City. Though his mother believes he was allergic to the lake, spending time on Tenkiller was a special getaway for Jacob. True to his Blount/Reid roots, time spent in friendly competition with his brothers was time well spent. Over the years the boys would fish, shoot guns, even play ping-pong or Pictionary, no matter the task, always keeping score. Jacob was known to be amazing with kids and the best uncle to his nieces. Jacob loved music and enjoyed family gatherings where he would sing with his Uncle Glen and cousin Justin while they played guitar. Jacob is preceded in death by his father, Steve Blount, paternal grandparents, Coy and Ada Blount and maternal grandparents, Leroy and Freddie Reid. Jacob will be missed by aunts, uncles, cousins and friends.

Friends may sign the book 10 am – 8 pm Tuesday at Agent Mallory Martin Funeral Home in Sallisaw where the family will greet friends 6 – 8 pm.

Memorials may be made to the Leroy and Freddie Reid Playground Fund at Blunt Baptist Church.