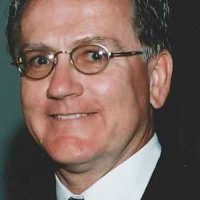 Jim was born November 6, 1945, to Gene Campbell Roop and Beatrice Scribner Wells. Commitment and dedication were pillars of Jim’s life, exemplified in his marriage of 47 years to his wife, Suzi Cox on June 13, 1970 in Westville, New Jersey.

He left behind a family whom he loved dearly and who will greatly miss his presence, wisdom, and prayers in their lives: His wife Suzi Wells of Sallisaw; son Matthew Wells and his wife Jen, granddaughters Jadyn and Ella, grandson Wyatt of Hyde Park, Utah; daughter Mandy Beth Niven, her husband David, grandsons Jacob and Zack, granddaughter Emma Beth of Jackson, Tennessee; son Luke Wells and his wife Coby, grandson Walker and granddaughter Kinsley of North Logan, Utah; daughter Jordan Heersink and her husband Nate, grandsons Wells and Logan of Crockett, Texas; and many nieces and nephews who he loved dearly and fervently supported throughout their lives. He was preceded in death by his parents and his sister, Martha B. Johnson.

Jim graduated from Norman High School in 1964 where he was a 3-sport letterman in cross-country, track and football. He attended the University of Oklahoma where he graduated in 1968. Jim was an active member of the Delta Tau Delta fraternity and has continued to enjoy those friendships throughout the years. While at OU, he was also named to Omicron Delta Kappa National Leadership Honor Society and selected as Big Man on Campus. Although a devout Oklahoma Sooner fan, Jim took great pride in embracing each university in which his sons and son-in-law played and coached. Jim worked hard to put himself through college and later dental school where he applied the values of “the three Ds”: desire, dedication, and discipline. These were taught to Jim at a young age by his grandfather, James Scribner, Daddy Jim. He instilled these values in his children and grandchildren leading by example through his constant love and support in all of their endeavors. Jim taught them to set goals, work hard to achieve them and to always be loyal and faithful to their commitments. He attended dental school at the University of Missouri, Kansas City, where he received the Best General Dentistry award. Jim began his dental career while serving as Captain in the United States Army at Ft. Jackson in Columbia, South Carolina from 1973-1975.
His education at OU prepared him for his profession and helped guide him and his family to the small town of Sallisaw, Oklahoma. Sallisaw stood out because it was the home of his favorite player, OU National Championship quarterback Steve Davis. Jim immediately embraced the community of Sallisaw serving in numerous civic organizations. He loyally assisted the Sallisaw Athletic Program as the voice of the Black Diamonds for 25 years, supported all booster clubs and was faithful to provide athletic physicals to student athletes. One of the biggest joys of Jim’s life was coaching his children’s little league and intramural sports teams, coaching them one-on-one throughout their sporting endeavors. Dr. Wells served the community of Sallisaw as a family dentist for 43 years. Throughout his career he cared for his patients to whom he was devoted and who through generations became like family.
However successful and accomplished in the various areas of his life, Jim will be most known by all those he touched, for the life he lived, and the depth of his love and commitment for God, Suzi, his four children and his grandchildren.

The righteous man walks in his integrity; his children are blessed after him. Proverbs 20:7

…I have fought the good fight, I have finished the race, I have kept the faith. Now there is in store for me the crown of righteousness, which the Lord, the righteous Judge, will award to me on that day—and not only to me, but also to all who have longed for his appearing. 2 Timothy 4:7-8

In Lieu of flowers, memorials may be made to Sallisaw Fellowship of Christian Athletes c/o Sallisaw Athletic Department, 701 J.T. Stites Blvd. Sallisaw, OK 74955