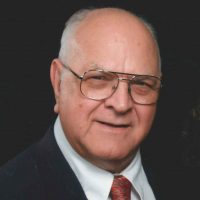 Graveside services for Jesse L. Huckelbury will be at 10:00 a.m. on Monday, September 10, 2018 at Sallisaw City Cemetery under the direction of Agent Mallory Martin Funeral Home.

Jesse L. Huckelbury, 88 of Sallisaw, Oklahoma was born July 16, 1930 to Kenneth H. Huckelbury and Eunice (Fuller) Huckelbury and passed away on September 5, 2018 in Sallisaw, Oklahoma. He was married to Virginia Stewart on August 15, 1959 in Stilwell, Oklahoma and was of the Assembly of God faith.
“Jess” as he was so fondly called, graduated from Central High School in 1948 and left to attend Connors State College in Warner, Oklahoma. In December 1948 he was called to active duty to serve in the Air Force in the Korean War. He worked directly under the General who served under President Dwight D. Eisenhower while stationed in Germany during the war.
After the war, and serving in the Air Force, he came back to the states and attended college at Northeastern state College in Tahlequah, Oklahoma. He graduated from Northeastern in 1958 where he received degrees in Chemical and Mechanical Engineering. He worked for Kerr McGee, Exxon Mobil and Exxon Mobil Dallas before building two companies of his own in Chemical and Mechanical Engineering. He and Virginia later returned to Sallisaw, Oklahoma in order to be near to and care for their parents.
Jess was preceded in death by his parents, Kenneth H. Huckelbury and Eunice (Fuller) Huckelbury, and one brother Kenneth H. Huckelbury. He was also preceded in death by two of his greatest friends in life, Rev. Freddie and Velvie Howard.
He is survived by his wife, Virginia of the home. He is also survived by extended family Tim, Sharon and Brian Randolph and Jennifer, Brian and Luke Sheppard; and also, two special friends, Richard and June Looper.
Jessie’s life was a blessing to everyone he befriended by his generous and caring heart. He will be deeply missed.

Graveside services will be at 10:00 a.m. on Monday, September 10, 2018 at Sallisaw City Cemetery under the direction of Agent Mallory Martin Funeral Home.

Viewing will be 10 am – 8 pm Saturday and 2 – 8 pm Sunday at Agent Mallory Martin Funeral Home in Sallisaw, OK