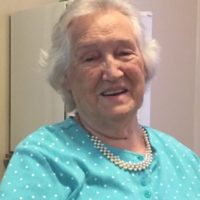 Funeral service for Jessie Mae Calloway, 86 of Sallisaw will be at 1:00 PM on Thursday, February 20, 2020 at Agent Mallory Martin Chapel in Sallisaw with burial at Sallisaw City Cemetery.

Funeral service for Jessie Mae Calloway, 86 of Sallisaw will be at 1:00 PM on Thursday, February 20, 2020 at Agent Mallory Martin Chapel in Sallisaw with burial at Sallisaw City Cemetery.

Jessie Mae Calloway was born as Jessie Mae Bruton on August 23, 1933 to Grace Lorene (Adams) Bruton and Walter Calvin Bruton in the Harrison community on Drake’s Prairie, southwest of Sallisaw and passed away on February 17, 2020 in Ft. Smith, Arkansas. Jessie Mae was the sixth of seven children. She was proud and knowledgeable of her family’s history and lineage. She loved talking about her younger years on Drake’s Prairie, fondly and lovingly sharing stories about going to church at Watts, playing down at the creek and working in the fields. Jessie was a proud graduate of Harrison School. She loved to show all of her old photos which depicted the life and times for all of the families that made up her community. Jessie Mae often recanted stories about growing up with the Stites, Paynes, Morses, McKinneys, Timmermans, Stephens, Tathams, Bagleys, Hights, Watts families and many other.

She married Odie Calloway in 1956 in Stilwell, Oklahoma. Together, they raised a family. Odie and Jessie spent their early years in Lawton, Oklahoma. They lived eight years in Gans, Odie’s hometown. In 1970, they moved their family to Sallisaw where their children all still live today. Jessie Mae was a faithful, dedicated wife to Odie, a loving and watchful mother, and nanu or nannie to her grandchildren she was actively involved in raising. She liked to sew and quilt, and loved to play the guitar. One of the first memories of her children is her strumming “Wildwood Flower”. She and her sisters all shared a talent of singing, they even recorded a song back in the day. The whole family was musically gifted.

Mom will be sorely missed, but so fondly remembered. There is nothing equal to a mother’s love. It’s our belief that Mom is with family in the presence of The Lord in a newly restored body with new found health, enjoying the peace and sights in heaven. Mom and Dad, we love and miss you.

She was preceded in death by her husband; parents; 2 sisters, Illa Barnes and Lucille Dority; and 3 brothers, Jess, Wadie and Joe Bruton.