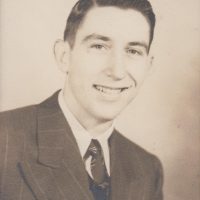 A tribute to celebrate Jim’s life will be held Wednesday, April 25, at Immanuel Baptist Church at 11 AM with Grandson Adam Herndon officiating. Interment will follow at 2:30 at Wanette Cemetery, Wanette, Oklahoma under the direction of Agent, Mallory Martin Funeral Home, Sallisaw, OK
Grandsons will serve as pallbearers. The family will greet friends Tuesday from 5 – 7 pm at the funeral home.

A tribute to celebrate Jim’s life will be held Wednesday, April 25, at Immanuel Baptist Church at 11 AM with Grandson Adam Herndon officiating. Interment will follow at 2:30 at Wanette Cemetery, Wanette, Oklahoma under the direction of Agent, Mallory Martin Funeral Home, Sallisaw, OK
Grandsons will serve as pallbearers. The family will greet friends Tuesday from 5 – 7 pm at the funeral home.

April 23, 2018, Jimmy Ray Herndon, Sr., Sapulpa, OK, formerly of Sallisaw, left this earth to be with his Heavenly Father. He told all of his physicians and family, he was ready and he knew his son, Jimmy, would open heaven’s gate.

Jim, Jimpa, Papa, was a loving and beloved, son, husband, dad, granddad, brother, uncle, cousin and friend. He had an infectious zest for life that touched everyone who had the opportunity to be in his presence.

As a young man Jim graduated from Asher High School. August 28, 1948 Jim married Mary Francis Wisdom. They were married 56 years. His first job was in OKC at Oklahoma Sash and Door. Jim and Mary moved to Houston, Texas to apprentice laying ceramic tile with his Father in law, Raymond Wisdom.
Jim was a mechanic at Asher Phillips 66 station, a welder at Tinker Air Force Base, a Church of Christ minister and chief tile setter with his son Danny, of Herndon Carpet and Tile, Muskogee, OK where he also taught his grandsons, numerous nephews, and others to set and grout tile.

He steadfastly remained positive throughout several health battles: peritonitis as a young father to five children, a brain aneurysm in 1989 and a severe car accident in 2008.

His family was his greatest joy. He devoted his life to loving and supporting them. He had the ability to make each one feel special. He loved to say he gave his good looks and smarts to his kids and grandkids. Jim never allowed anyone to leave a visit or conversation in low spirits. He loved playing cards, going out to eat, and was the champion guacamole maker. His grilled cheese sandwiches and homemade ice cream are family favorites. Friends held a special
place in Jim’s heart. Red Barnes will always be his forever friend, confidant, encourager and creator of the Papa Stick. He loved his Canada fishing trips with Dwight, Zac, and Ed Calhoun and teaching his grandsons to fish. His Western Sizzlin friends and his waitresses were lovingly talked about ofter. His tile laying buddy Bill Fisher loved to visit as much as perfectly lay tile. Keevin Pense in Tulsa was always there when Jim and Shirley needed him. Asbury Methodist Pastor Tom Harrison’s prayers at the Clarehouse meant so much.

In lieu of flowers, please consider donations to the Clarehouse, 7617 S Mingo Road, Tulsa, OK 74133. Our family thanks St. Francis Hospice Staff for their caring hearts and conscientious service. We are especially grateful to the loving staff at The Gardens nursing home, Sapulpa, OK, where Jim spent his last 5 months. He was able to return for one day to share thank yous and goodbyes before his transition to the hospice Clarehouse. He was treated with dignity, compassion and tenderness. The entire family was supported with grace in a very peaceful loving manner.

Always and forever his love will remain in our hearts.