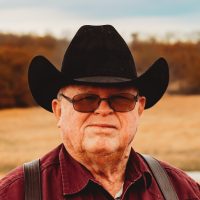 Joe Dale Shamblin was brought into this world January 8, 1954, the son of Bob and Norma Rae (Hyles) Shamblin. He attended Muldrow Public Schools, where he achieved the titles of Mr. MHS, President of FFA, Captain of the Football Team, and Student Council President. In his early life, he was a rodeo bulldogger, an aspiring rancher and worked tirelessly in the fields of Paw Paw Bottoms throughout his youth. He was an Offshore Barge Foreman and Crane Operator for Brown and Root Oil and Gas Industries. In 1976, he met the love of his life, Teresa Kay Osburn, and his world was about to change. They married on April 10, 1981 in Muldrow, Oklahoma and started their home. They became a family when their son, Terrell, was born. Soon after they welcomed a daughter, Kaytlin, and their small family was complete.

Joe accomplished every task and job that was placed before him. He worked with cattle and started his custom hay baling business. He worked for Sequoyah County District 1 building roads and then transferred to Superintendent for the Waste Water Department of Muldrow and later for Roland, where he retired. He was also a 32nd Degree Mason, Fire Chief for Muldrow and Roland Fire Departments and was on the Redland Fire Department.

The hardest worker you would ever meet, but as hard as he worked, his honesty was valued by everyone. His greatest accomplishment in life, however, was his family who will mourn his passing greatly.

his loving wife, Teresa of the home;

daughter and son-in-law, Kaytlin and Josh Barnes of Muldrow, OK;

and numerous other relatives and innumerable friends.

He was preceded in death by his father, Bob Shamblin; brother, Bryon Shamblin; and his grandparents, Zip and Mandy Shamblin and Dave and Alta Hyles.

Viewing will be 10 AM – 8 PM Monday at Agent Mallory Martin Funeral Chapel in Muldrow, OK where the family will greet 6 – 8 PM.