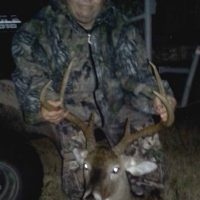 John married Dora Marie Bell on September 2, 1975 in Muskogee, Oklahoma. They made their home in Gore, Oklahoma after John’s military service. John was in the U.S. Army for 6 years and stationed for 2 years at Ft. Davis, Canal Zone, Panama. The rest of his service was state side in Ft. Sill, Oklahoma. He was a welder with 226 maintenance company. After the military, he worked at the U.S. Army Corps of Engineers Tenkiller Project Office until his early retirement.

John loved hunting and fishing, but most of all his grandchildren.

He was preceded in death by his parents, Suzanne and John Dyer, Sr. and a sister, Margo Jones of Bartlesville, OK.

The family would like to thank Shelly White and the staff of Gore Nursing Home, Jack C. Montgomery V.A. Medical Center for years of care, and St. John Medical Center in Tulsa, OK.