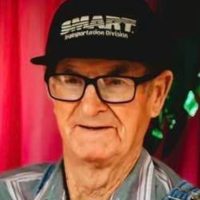 Surrounded by his loving family John entered Heavens gates April 15, 2022 at his home in the Blackgum Community. John was born August 9, 1934 in Chavies, Kentucky to John and Nanny McKnight-Sandlin. He was the 5th child of 9 children. John came to Oklahoma when he was 12 years old with his family who settled in the Blackgum Community where John still lived on the family home place until God called him home. John served in the United States Army joining May 15, 1957 receiving his honorable hardship discharge related to the death of his mother August 12, 1965. While in service he received sharpshooter, expert rifle M-14 and good conduct medals. He purchased the family home place from his mother and other siblings while still in the Army. Upon returning home John began his journey as a responsible adult, always working hard to support his family.

John married Carol Lowe and this marriage lasted 9 years. To this union John was blessed with a son, Randy, and a daughter, Jenny. John then met and married the love of his life, Helen Railey McKinney, on February 14, 1981. He was then blessed with 3 bonus children, Eugene, LaTricia and Kimberley McKinney who loved him dearly. John was loved and respected by all who knew him for his unwavering willingness to help anyone who needed help.

Viewing will be 10 AM – 8 PM Wednesday at Agent Mallory Martin Chapel in Sallisaw, OK where the family will greet 6 – 8 PM.