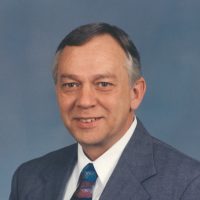 He was born April 25, 1945 in Fort Smith, Arkansas to Arthur and Jewel Lenington. He married Betty (Compton) Lenington July 17, 1978. Our beloved Johnny passed away January 7, 2023 in Sallisaw, Oklahoma after an extended illness. He was preceded in death by his parents; his wife, Betty; his sister, Wanda West; and his brother, Gene.

John was passionate about teaching and education. As one student wrote, “The enthusiasm with which he leads his class is contagious” and “Most impressive was his availability to any student that may require his assistance.“ He was happiest when he was teaching and could engage any student with his teaching style.

He is survived by one sister, Clara Knight of Fort Smith; several nieces and nephews: Steve Owens (Andrea) of Sallisaw, Linda Thomas (Danny) of Sallisaw, Niki Wilson of Fort Smith, Pam Ollis (Dale) of Sallisaw, Terry Wilson (Rhoda) of Sallisaw, Brenda Shafer (Ricky) of Sallisaw, and Karen Lenington of Sallisaw. He is also survived by a host of great nieces and nephews, an extensive list of friends from all over the country, and former students who loved him dearly and will miss him more. Jeff, Trina and Josie Owens, thank you for always being the first to respond when Johnny needed anything! Josie, you were special to your Uncle Johnny. The name Josie in Hebrew means, “God increases.” This image of something that expands and increases our world is life-affirming and comforting and that is what you were to Uncle Johnny.

The family sends a special thank you to Linda Fox and the nursing staff of Mays Professional Home Health for their unwavering love, care and support these past years. We would also like to thank the staff at the Sallisaw Hospital for your care and support of Johnny and his family.