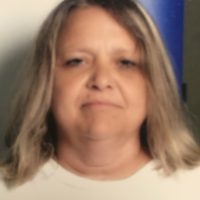 Graveside services for Judy Caryl Arnold, 64 of Roland, Oklahoma will be at 10:30 am on August 21, 2018 at Sallisaw City Cemetery in Sallisaw, Oklahoma under the direction of Agent Mallory Martin Funeral Service, Inc.

Graveside services for Judy Caryl Arnold, 64 of Roland, Oklahoma will be at 10:30 am on August 21, 2018 at Sallisaw City Cemetery in Sallisaw, Oklahoma under the direction of Agent Mallory Martin Funeral Service, Inc.
She was born on October 2, 1953 in Wynnewood, Oklahoma to Norma Turner Ramming and Chester Ramming. Judy graduated from Duncan High School in 1970. The following year she went to Washington, D.C. to work for J. Edgar Hoover at the F.B.I., after a year she came back home having decided Washington, D.C. was not for her. A year later, she agreed to marry Rod Arnold and became a domestic engineer, homemaker and housewife. Two years later she and Rod were blessed with their first child, a son. Judy later returned to school at Cameron University in Lawton, OK where she studied accounting and played tennis. She enjoyed playing and watching tennis and also enjoyed fishing when the weather was right, not too cold nor too hot. You may have called her a fair weather fisherman. She enjoyed the pop rock music of the 60’s and 70’s, Rod Stewart, Janis Joplin, Bob Marley, Seals and Croft, but what she enjoyed most was spending time with her children and grandchildren. Don’t worry be happy. She also enjoyed sewing and making quilts, traveling, seeing new places and things. She loved life. Eight years after being diagnosed with stage 4 breast cancer, undergoing multiple surgeries and treatments She went to be with her Lord and Savior Jesus Christ on August 17, 2018.

husband: Rod of the home

1 daughter: Christina Arnold of the home

2 sons: Duke Arnold and Natasha of Sallisaw, OK and Eric Arnold and April of Roland, OK

She was preceded in death by her father.

Visitation will be 3 – 8 pm Monday at Agent Mallory Martin Funeral Home in Sallisaw where the family will greet 6 – 8 pm.

In lieu of flowers, memorials may be made to Donald W. Reynolds Cancer Support House
www.reynoldscancersupporthouse.org