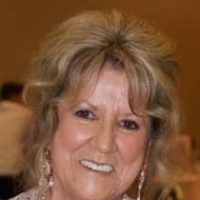 Judy married Larry Dean Bowman on August 17, 1973 in Fort Smith, Arkansas. The couple were longtime residents of Broken Arrow, Oklahoma where they raised their family and made many lifelong friends. Judy was employed at McDonnell Douglas Aerospace Company for many years, before becoming a full-time homemaker. During their retirement years, Judy and Larry moved to Grand Lake where they resided for 10 years before moving to their current residence in Winganon, Oklahoma.

Judy enjoyed traveling, shopping, baking and time spent with her husband, children and grandchildren. She always looked forward to the Annual Lewis Family Reunion at Brushy Lake in Sallisaw, Oklahoma.

Judy is preceded in death by her daughter, Kenda Cook; her son, Keith Cook; her great-granddaughter, Alana King; her parents, Ted and Ruby Lewis; her brothers, Jimmy Ted Lewis, Ronald “Bird” Lewis and Jack Lewis; and her sister, Diana Lewis.

Honorary Pallbearers will be the Lewis Nephews.