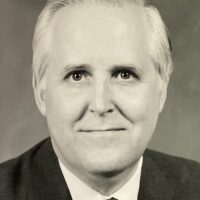 A Celebration of Life for Kenneth S. Oliver will be held on Friday, May 21st from 4:00-6:00 PM at the Foster Village Recreation Building, 6600 Starnes Rd, Wautaga, TX 76148. Graveside memorial service will be held on Saturday, May 22nd at 2:00 PM at the Sallisaw Cemetery, 714 E Houser Ave, Sallisaw, OK 74955, arrangements by Agent & Mallory Martin Funeral Home, 918.775.4414. Floral donations should be sent to Agent & Mallory Martin Funeral Home in Sallisaw. Financial donations in honor & memory of Special Agent Kenneth S Oliver, retired can be made to: FBI Agents Association, Memorial College Fund at www.FBIAA.org.

He was welcomed into the world on May 23, 1931 to Bailey & Jean Oliver in Inglewood, California. After high school, his strong commitment to integrity, fidelity, and law & order led him to join the US Army during the Korean War as a company Personnel Administrator, Sergeant First Class for company B, 2nd Armored Division 66 Medium Tank Battalion from 1950 – 1953 with an honorable discharge.

During a short leave in California for his parents 25th wedding anniversary, he became instantly smitten with an El Camino college co-ed, Raye Holman of Sallisaw, OK while dancing at the Palladium. Although he was headed back to Germany the next day at noon, he was able to get an address and thus began a romance through letter writing – which were all saved by Raye – convincing them both they were meant for each other. They were married April 10, 1954. A love story that lasted 62 years prior to Raye’s death in 2016.

In 1959, Ken received a BS in Police Science & Administration from Los Angeles State College, now known as California State University LA while also working as a patrolman for the City of Glendora (1955-1956), and the California Highway Patrol (1956-1962). He even had a short stint as a CHiP motorcycle officer. Not quite like the TV show, he was on a 3-wheeler.

In 1962, Ken applied to and was selected for J. Edgar Hoover’s elite US policing agency, The Federal Bureau of Investigation. His career of 20 years included wearing the “G-man” suit, including the hat every day for most of those years. He continued the suit & tie practice for most every occasion until his death. This new adventure in his law enforcement career also meant new adventures (packing & unpacking) for his wife & daughters as the assignments included moves to Butte, MT, Coeur d’Alene, ID, New Orleans, LA, Shreveport, LA, back to New Orleans, LA, Washington DC (with moves to VA & MD), Gallup, NM & Tempe, AZ.

While assigned as a Special Agent Supervisor at the FBI Headquarters in Washington, DC in 1968, he was a specific course instructor for The National Crime Information Center (NCIC). A computerized “real time” system to disseminate information concerning stolen property and wanted persons to law enforcement agencies throughout the United States and Canada. He next served as the Senior Special Agent to the Gallup, New Mexico field office. Establishing effective protocols and securing positive policing relationships within the Navajo, Zuni, and Hopi Nations. Including working with Michael Nez, the first FBI Special Agent from the Navajo Nation. He and Raye loved this assignment – a Big Man in a small town.

After retirement, Ken worked as an investigator for Intel in Albuquerque, NM, a private investigator on many cases in many places, including working for a Saudi Prince, and the properties manager for the Federal Way, WA Police Dept. In 1985, he was the Democratic candidate for the Sheriff of Maricopa County, AZ, where his opponent squeaked out the win. Raye and Ken eventually settled in Fort Worth, TX in 1998.

A life-long learner and natural teacher, Ken was a member of the faculty of San Antonio College, Walnut CA Police Science Program from 1959 – 1962. In 1980, Ken was a 10-week session instructor at the FBI Academy in Quantico, VA. Ken continued to share his knowledge long after his retirement from the FBI. He developed and taught a wide variety of curriculum for the Senior Education Program at Tarrant County College, from US Presidents to Crime Prevention for the Elderly. He was a member of the early networking group, Sales Pros, and served as President of The Lakes HOA in Tempe, Arizona.

During his life of dedication and duty to law enforcement, he and Raye raised 4 daughters, built houses, decorated houses, traveled, danced, ate delicious food (she cooked, he ate) enjoyed his extended family and the friends they gathered & kept over all of the places they lived.

Ken will be remembered by so many people and by the lives he touched (including criminals he captured and “got off the streets” – but probably in a different way.) He always made people feel special & glad to be around him. He was fun & funny and left whole file(s) in paper and on the computer of jokes to tell. We all enjoyed the real life stories he would share. His life made a difference, and he will be missed.

A Celebration of Life will be held on Friday, May 21st from 4:00-6:00 PM at the Foster Village Recreation Building, 6600 Starnes Rd, Wautaga, TX 76148. Graveside memorial service will be held on Saturday, May 22nd at 2:00 PM at the Sallisaw Cemetery, 714 E Houser Ave, Sallisaw, OK 74955, arrangements by Agent & Mallory Martin Funeral Home, 918.775.4414. Floral donations should be sent to Agent & Mallory Martin Funeral Home in Sallisaw. Financial donations in honor & memory of Special Agent Kenneth S Oliver, retired can be made to: FBI Agents Association, Memorial College Fund at www.FBIAA.org.