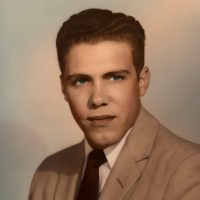 Memorial Service for Lawrence L. Myher, 85, of Roland, Oklahoma will be at 3:00 PM on Friday, February 11, 2022 at Roland Hills Baptist Church in Roland, Oklahoma under the direction of Agent Mallory Martin Funeral Service, Inc.

Lawrence L. Myher, 85, of Roland, Oklahoma passed away on February 8th, 2022 comfortably in his home with his loving wife and family close by.

Lawrence was born on June 3, 1936 to Lawrence and Lillian Myher in Ponca City, Oklahoma. Lawrence spent many hours working along side his Grandfather in his machine repair shop where Lawrence learned a skill he had a natural knack for. After Lawrence graduated from high school in Decatur, Arkansas, he joined the Air Force as the Korean War was ending. From 1954 to 1958, Lawrence proudly served our country as a flight navigator deployed throughout Europe.

After his service he became a successful machinist. He was nationally recognized for a tooling line he designed while working at Holly Carburetor. He was so well known for his skill, just 2 years ago, 30 some years into retirement, a technical college asked him to come teach a class, although he was tempted he happily declined.

In 1959, Lawrence met Frankie thru a mutual friend in Wichita, KS. They married shortly after on February 14th, 1960. Lawrence and Frankie were blessed with their son Timothy Myher; three grandsons Chase, Payson and River; and two great granddaughters Shelly and Rylee.

In his free time, Lawrence often took his boys fishing, taught them to be a sharp shooters, and loved spending time at the swimming pool with his family. He went on many family road trips through the years.

Lawrence was preceded in death by his parents Lawrence and Lillian, and his Sister Peggy. He is survived by his wife Frankie, son Tim (wife Peggy), his grandchildren Chase (wife Laurie), Payson, River; and great grandchildren Shelly and Rylee.