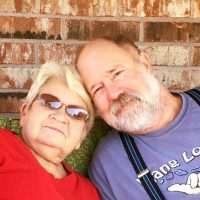 Lelland was born on January 9, 1952 in Marble City, Oklahoma to Lucille Pearl (McGee) Choate and Duane G. Choate and passed away on July 29, 2020 in Van Buren, Arkansas. Jana was born on March 9, 1953 in Sallisaw, Oklahoma to Ollie Louise (Brooks) Campbell and Wayne Howard Campbell and passed away on July 30, 2020 in Tulsa, Oklahoma. They were married on February 25, 1972 in Sallisaw, Oklahoma.

Mr. Choate was a 1970 Graduate of Sallisaw High School, 1988 graduate of Northeastern State University with a Bachelors Degree in Industrial Technology. He was a member of Immanuel Baptist Church, Member and Board Member of the Okie/Arkie Trail Ride, Board Member of Dwight Mission Cemetery and a member of Sequoyah County Fair Board. He loved trail riding, nature, hunting and fishing. After retiring from ODOT he worked for R & R Pipeline as a parts runner. He volunteered for Sallisaw Lions Club for 40 years and was a reserve deputy for Sequoyah County Sheriff Department for 10 years.

Mrs. Choate was a 1971 graduate of Sallisaw High School and a member of Immanuel Baptist Church. She was a scout and a lifetime member of The Okie-Arkie Trail Ride and active in Sequoyah County 4-H. She had a love of all things equestrian and was an accomplished seamstress. She loved Razorback basketball, fishing and most of all her family and grandchildren. The family would like to extend a special thanks to the Gore Nursing Center.

numerous other nieces and nephews.

Viewing will be 1 – 8 pm Thursday and Friday at Agent Mallory Martin Funeral Home in Sallisaw, OK where the family will greet 6 – 8 pm Friday.