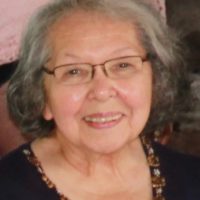 Memorial Service for Levada Babala (Smith) Wildcat, 88 of Vian, Oklahoma will be at 2:00 PM on Wednesday, February 23, 2022 at Marble City Baptist Church in Marble City, Oklahoma under the direction of Agent Mallory Martin Funeral Service, Inc.

Memorial Service for Levada Babala (Smith) Wildcat, 88 of Vian, Oklahoma will be at 2:00 PM on Wednesday, February 23, 2022 at Marble City Baptist Church in Marble City, Oklahoma under the direction of Agent Mallory Martin Funeral Service, Inc.

Babala was born on October 21, 1933 at Claremore Hospital, Claremore, Oklahoma. She was the sixth child in a line of eight and the first to be born in a hospital. Her parents were Stokes Smith and Lila McCoy Smith. Her older sister, Christine Smith Feilds told her she could not go to school with the name Babala and gave her the name Levada. She cherished her younger years at Dwight Mission and presided over many a gathering of the Dwight Mission Alumni group.
She married French Wildcat in October of 1957 in Los Angeles, California. French and Levada departed California with their two children, Veda and Victor to move back to Vian, Oklahoma. Eventually moving to Muskogee, Oklahoma where she became a Licensed Practical Nurse and later a Registered Nurse.
Levada Wildcat was a caregiver. She is best known for her time as a nurse in the ICU area at Muskogee General Hospital. She began her career at that hospital and retired from that hospital.
If Mrs. Wildcat saw a need she took care of that need or found someone who would take care of it. She took care of the needs of others before her own. The four words she spoke the most were “TRUST IN THE LORD”. Then Levada set out to do something about it.
Always living the words she spoke, at 88 years of age on July 17 and 18, 2021. Levada loaded French up in the car and drove to get food to deliver to the “old folks” and shut ins. On July 18, while preparing to go to church, she had a stroke. For seven months after that, she attempted recovery, continuing to pray and tell others multiple times daily, “Trust in the Lord”.
Admittedly while she was doing that, she was barking orders to the nurses and staff of Countryside Estates, helping the nurses get organized and asking questions about their duties.
Always the caregiver herself, the staff at Countryside not only gave her care, they cared. And there is a difference. The same difference Levada Wildcat, the most devout Christian you ever met, LIVED EVERY DAY.

Husband, French of the home;

Numerous nieces, nephews, cousins and other relatives and friends.

In lieu of flowers, the family has requested contributions to the Levada Wildcat Nursing Scholarship Fund, PO Box 63, Warner OK 74469.