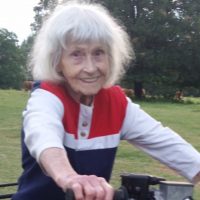 Funeral Services for Lillian J. (Brown) Yates will be at 1:00 pm on Monday, April 23rd at Agent Mallory Martin Chapel in Sallisaw, Ok. Burial will follow at Drake Stand Cemetery.

My first recollection of Lillian Josephine Yates, whom I grew to love and call Grandma, was 14 years ago. Tony took me to the hayfield in Coffeyville, Kansas, and there he introduced me to his paternal grandparents, Carl and Lillian. Carl drove the hay truck while Tony and I loaded, and 83-year-old Grandma stacked. Once the truck was loaded, Cark E. sped to the barn with Grandma sitting on top of the hay. Carl’s eagerness interfered a little with safety. He clipped a tree limb and it was all Grandma could do to hang on. I knew right then she was a tough little lady. And after that, I witnessed it on numerous occasions. I often called her the Bionic Woman.

I remember visiting with Grandma one time when I had a severe headache. She diagnosed me and pulled out her home remedy book and treated me right there. She was always eager to help. A few days later, I received a 20-year-old newspaper clipping and a doctor’s report, along with a hand-written note stating she was sure it was sinus related. Guess what…. She was right!

Grandma collected thing – Everything! But she really liked her porcelain dolls. She amazed me when she knew exactly where to find a 2-inch pair of metal framed glasses that belonged to one of her dolls.

Advancing a few years – to 2012 – when Grandma’s husband of 76 years passed away, Grandma was afraid to live alone, so she joined Don and Alice in their home – and that was quite an adjustment for all. Grandma stopped up the toilet multiple times, broke the washing machine, and overflowed the sink, just to name a few. To offset any negatives she caused, she worked diligently to assist Don and Alice in any way she could. However…… sometimes that created just a slight problem too – because she wanted to do things her way.

I’ll never forget the day she looked out the front window to see a FOR SALE sign in the yard. Oh, was she angry. I’m talking REALLY angry! She pouted, made threats and tried to push her weights around – all 95 pounds! But, the farm sold quickly, and much had to be done. Don, Alice and Grandma were moving to Sallisaw, and I promised Grandma it was the best thing for all of them and vowed to prove it to her.

November 2014 – Freezing temperatures, icy roads and heavy snowfall, this little energized bunny insisted on sweeping the snow off the ramps, so it wouldn’t be slippery for the rest of us as we loaded millions of boxes containing their lifetime of collections and headed to Oklahoma. She was really upset on the way here, because there wasn’t room for all 23 of her sewing machines. She used to work at a sewing factory you know!

She quickly adjusted to her new location. She enjoyed meeting new people and going places. She loved visitors anytime and looked forward to seeing the Home Health nurses as well as the great-great grandchildren. Abbey and Lexie visited most frequently and often delivered her meals. To show her appreciation (on a good day) she has been known to tip them a dollar each.

It wasn’t hard to strike up conversation with Grandma. Her hearing impairment got her on topics way out in left field, but that was ok… we got to hear a new story.

I was fortunate to spend quality time with Grandma on our way to her doctor visits, getting hair and nails done, shopping, or picking black berries, or going out to eat. During those times, I learned that she was born June 5, 1920; her parents were Joe and Letha Brown; she had 6 brothers, Bob, Richard, Archie, and Joe, who preceded her in death, and 1 brother Bill Brown age 95, who resides in Coffeyville, Kansas, and a half brother, Jim Mason. She had 4 sisters, Alice, Laveena, and Betty, and had a twin sister, Lois, who all preceded her in death. Grandma admitted she was the bossing twin, but claimed Lois was the smarter one. Grandma said every time she got a spanking, her twin sister cried too, and that would make their mother mad, so Lois got spanked for crying. Grandma never understood that.

When prompted, Grandma spoke of various hardships throughout her life. As a young girl, she moved by covered wagon from Bartlesville, Ok to Independence, KS. She married at age 15. They lived in a tent until her husband, Carl, could build enough houses to sell and eventually build one of their own. They really wanted a little girl, but God blessed them with 4 boys, Carl Aden, Darrel, Don and Roger. Grandma was a good cook and often ran interference when she thought Carl was over correcting the boys.

Grandmas was just a little mischievous and loved to have fun. I was told she had an old wringer washing machine, and she would drop a dime in the laundry so her niece would find it. That was a double win – Grandma got help and the niece who found the dime always wanted to come back and help again, because that dime would buy 10 pieces of candy at Ben Franklin’s.

I was also told that she dressed up for Halloween when she was nearly 50-years old. She looked and acted like the kids and they had a blast!

One of the things I liked about Grandma is she wasn’t wasteful. However, she sometimes went just a little overboard. She was always thinking how she could use, or what she could make, with items that really should have been discarded. It was just so hard for her to throw anything away!

Being vertically challenged and measuring under 5 ft., Grandma had a hard time reaching the gas pedal or seeing over the dash. Driving a vehicle was a challenge for her, but she was all in! She drove just like she did everything else – Fast and Feisty!

Not long after I met her, we approached a large cattle gate and she insisted on opening it. I thought to myself, yeah, she’s gonna need my help. Big gate – little woman. But I was wrong. She had used her innovative skills and had attached an old roller skate to the bottom, and it opened with ease. I was rather impressed.

Grandma didn’t ask for much but rather managed with what she had. However, she suddenly thought she needed a lot of things when she spotted, or even thought about, The Dollar Tree. She loved that place and thought she was supposed to fill her basket every time she went. Everybody needs more muscle rubs, right? You never know when the 10 you already have might run out or get misplaced. And, you’d better go ahead and get another plastic bucket or bowel, because the 5 you already have is a different color (you get the picture)! I’m telling you, this little lady was a hoot! One of her last shopping trips to Wal-Mart was a memorable one! And, she always flashed her big smile when the pharmacy clerk recognized her and told her she knew Tony. I’m not so sure what Tony thought of that, because he never knew what shenanigan Grandma would pull next.

Until a few months ago, Grandma continued her desire to be Ms. Independent. She insisted on doing her own grocery shopping. She’d make her list more than once, and sometimes a whole bunch of times, but when she got to the store she could never find it. (Bet you’ve never done that)! So, we decided to tape it onto her purse. That didn’t work. She couldn’t see it very well, so we put a long string on it and pinned it to her clothes. A young Wal-Mart employee watched her as she read her list and offered assistance. Grandma was thrilled! She had made a new friend and he even called her Grandma. Before long she was making up excuses to go to Wal-Mart quite regularly.

On one particular Wal-Mart outing, Don accompanied her. They hadn’t been there long when Grandma told Don she needed to go check on something. She failed to give him any details. A long time passed and Don hadn’t seen Grandma, so he started the search. Grandma was nowhere to be found. Thinking she might have gone back to the car, he started out to see. As he exited Wal-Mart, what he saw next was no surprise. A little old lady driving a motorized cart making a fast get-a-way to The Dollar Tree and security chasing her behind her! She was on a mission, and was quite determined. Grandma usually got her way, but there was no Dollar Tree for her that day!

Grandma accepted the Lord and became a Christian in 1955. She was a member of the Church of God. Although she moved to Sallisaw, she continued being faithful in paying her tithes to the church. She looked forward to the visits from my dad, Herbert, and his wife, Barbara. Barbara brought good food and daddy always had prayer with her. Grandma told me how much she appreciated them coming and how good it was when she felt the Holy Spirit.

As I reflect on her stories and all that I know about her, I’m in total aw… – just trying to imagine what it would be like to have grown up in her era, and in her shoes. After Grandma finished telling her stories she always smiled real big and said, “But I made it.” Those words are ringing in my ears today because once again Grandma can say, “I made it”.

She was blessed with a long life, and had she lived until June 5th she would have been 98-years old. She will be so very missed.

She was a very strong, unique antique little girl. Our hope today is that she has a new body, a new home, and will be forever happy in the presence of God.

Funeral Services for Lillian J. (Brown) Yates will be at 1:00 pm on Monday, April 23rd at Agent Mallory Martin Chapel in Sallisaw, Ok. Burial will follow at Drake Stand Cemetery.