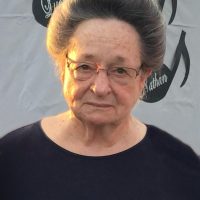 After High School Margaret Faye began her education at Northeastern State University. She graduated with her Bachelors Degree in Education majoring in English. She then moved to Sapulpa and began her teaching career. She taught several years there before moving back to Sallisaw. She then taught one year at Moffett School. Her next 31 years were spent at Muldrow Elementary where she taught first grade until she retired. She later assisted at Vian School in helping with the Alternative Education Program. She was involved in the local 4-H club for many years as a 4-H leader. Margaret Faye also worked at Wal-Mart while teaching and then continued on until about 2020.

If you knew Margaret Faye you would know that she loved sewing and quilting. She has made many garments for family members through the years. She would often give quilts for baby showers, weddings, and graduations. Last year she helped her great-nieces learn to sew and make a pillow that matched a quilt she had made for them. She was thrilled that she could do that and would make mention of it quite often. Margaret Faye was known for her many donations to help out with fundraisers such as FFA, Band, and the Buffington Cemetery Association throughout the years.

Besides sewing and quilting, she loved to bake. Cinnamon Rolls being one of her most loved baked goods. For Ann’s birthday it was requested by the Muldrow School teachers that she must bring cinnamon rolls for them to all enjoy. It was a given that every year in January she made cinnamon rolls. For family dinners it was said, “Don’t bring anything else, just concentrate on making cinnamon rolls!”

She and Thomas also enjoyed traveling to see Aaron and Belinda and their children in Virginia. During the Summer you could find them camped out at the Brushy Lake or making trips to Branson. As she would say that was their enjoyment.

Margaret Faye will be missed greatly by many.

She was preceded in death by her parents, Ted and Noma Stites; one sister, Carla Wortman; one brother, Tommy Stites; and one sister-in-law, Jane Stites.

Honorary Pallbearers will be Craig Gruber, her nephews and Muldrow School Teachers.

Viewing will be 10 AM – 8 PM Tuesday at Agent Mallory Martin Funeral Home in Sallisaw, OK where the family will greet 6 – 8 PM.