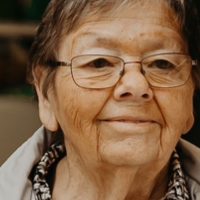 She was born on February 16, 1941 in Carlile, Oklahoma to Niva Iona (Vessell) Hefton and O.L “Dink” Hefton and passed away on October 29, 2022. She was married to Donald Baker on November 29, 1958 in Vian, Oklahoma. He preceded her in death. She was a Kindergarten Teacher’s Aide for over 30 years for Vian Public Schools and a member of Round Mountain Church.

Melba was preceded in death by her husband of 57 years, Donald Baker; four sisters, Reba Lindsey, Lois McCauley, Willene Lipe and Wanda Young; one brother, Bill Hefton; and her parents.

Viewing will be 10 AM – 8 PM Wednesday at Agent Mallory Martin Funeral Home in Sallisaw, OK where the family will greet 6 – 8 PM.