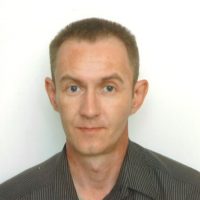 Chris was born into this world on June 16, 1971 in Stilwell, Oklahoma to Thursey (McMurtry) Catlett and Michael Dale Rogers. He left this world on January 22, 2021 in Oklahoma City, Oklahoma at the age of 49 years, 7 months and 18 days old. Michael Christopher Rogers was baptized on May 26, 2001. To friends and family he was known as Chris, but some knew him as Mike.

Chris liked to work with nature. He planted a garden and took pride in his lawn, he just loved the smell of fresh mowed grass. There were times, because of his health, that he wasn’t able to mow it as much as he would have liked, but he had a really, really good neighbor, Willie, who would come over and mow it for him. Chris loved his neighbor Willie. While in high school, he met Gary Scott and they became best friends. That friendship lasted a life time. Chris was proud of his water garden that his mom and stepdad helped him build. He told his mom where he wanted the plants planted and it turned out good. He received lots of compliments on it and only he and his mom knew where the flaws were. He liked the sound of waterfalls and he had two in his water garden. Chris liked astronomy and had an observatory with a roof that rolled back and forth so he could raise the telescope from his computer and that is another project that his stepdad and mom helped him build. He loved cats and has always shared his life with them. He had a Canada Lynx named Shogun. At the present time, he has two — Sweet Pea and Jitterbug. He loved them dearly.

Chris had a great sense of humor. The things he posted on Facebook brought laughter to his friends and family. He was always pulling things on his mom. Last year on Mother’s Day he told her that she had left a bra on the dryer and for her to go and get it. When she went to get it, there were flowers on it for her. His mom fell for his antics every time. The last Christmas he got to spend with family, he put on a wig and a fake mustache and pretended to be a neighbor that needed to borrow sugar. His mom didn’t even know him — so he had fooled her again!

Chris was a good and caring man. He would take overseas duty of his fellow servicemen so they could stay with their family. He bought Christmas presents for under privileged children and donated things to the homeless. Chris was liked by many, many people. If you knew him, you liked and loved him. He was a wonderful son. To all his family and friends — This is not goodbye, it’s just, “I’ll see you guys later.” Chris’ mom would like to share a pin that was on Pinterest and that is “Love the people God gave you because one day He will want them back.”

In lieu of flowers, memorials may be made to the National Kidney Foundation or American Heart Association.